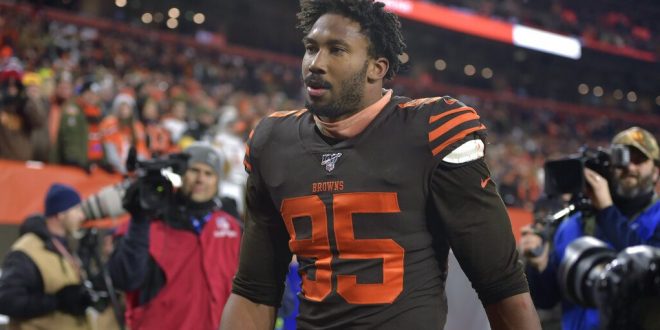 Cleveland Browns defensive end Myles Garrett walks off the field after he was ejected late in the fourth quarter of an NFL football game against the Pittsburgh Steelers, Thursday, Nov. 14, 2019, in Cleveland. The Browns won 21-7. (AP Photo/David Richard)

After the brawl that spread throughout the sports world, the Browns’ defense is going to have to fill a large gap.

Browns defensive end Myles Garrett hit Pittsburgh Steelers quarterback Mason Rudolph on the head with a helmet in Thursday night’s brawl. This led to an indefinite suspension for Garrett. He is the teams’ leading pass-rusher and ranks fourth in the league for sacks (10).

Cleveland head coach Freddie Kitchens thinks his team will be resilient in attempting to stay focused moving forward with the season.

With Garrett out indefinitely, Browns defensive coordinator Steve Wilks will have to find a way to make up for Pro Bowler’s absence.

As a result, Kitchens believes his team is physically and mentality up to the challenge.

The next man up for the Browns defense will likely be defensive end Oliver Vernon. This season, Vernon has been responsible for 19 tackles and three sacks.

However, Vernon is questionable to play due to a knee injury. With Vernon’s status uncertain, the Browns may turn to defensive end Chad Thomas. In the Browns matchup against the Steelers, Thomas recorded his third sack of the season.

In addition, linebacker Joe Schobert should continue to be a presence for the Browns defense. Furthermore, Schobert leads the team with two interceptions. He ranks fifth in the league in tackles (92).

Most importantly, with safety Morgan Burnett placed on injured reserve, the Browns secondary should look to step up to challenge.

Additionally, cornerback Damarious Randall and free safety T.J. Carrie could be the difference makers for Cleveland. Carrie records 33 tackles on the season for Cleveland.

The adjusted Browns defense will face their first test against the Miami Dolphins in Cleveland on Sunday.

The Dolphins (2-8) have struggled offensively. In particular, the Dolphins offensive line has failed to protect quarterback Ryan Fitzpatrick against opposing defenses.

In their Week 11 loss to the Buffalo Bills, Fitzpatrick was sacked seven times.

As a result, this could be the match-up the Browns need to see who will rise up to fill in hole on the defensive line.

Kick-off for Sunday’s game between the Dolphins and the Browns is set for 1 p.m.