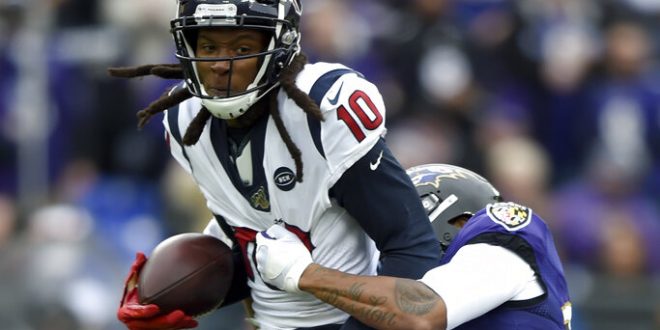 Houston Texans wide receiver DeAndre Hopkins (10) tries to stay up as Baltimore Ravens cornerback Jimmy Smith (22) wraps him up during the first half of an NFL football game, Sunday, Nov. 17, 2019, in Baltimore. (AP Photo/Gail Burton)

Pass Interference is a Bigger Problem Now in the NFL

In the Baltimore Ravens-Houston Texans game this past Sunday, there was a controversial play between DeAndre Hopkins and Marlon Humphrey. Hopkins went up to make a catch and Humphrey threw his body over top of Hopkins before the ball got there.

Texans Head Coach Bill O’Brien threw the challenge flag to attempt to get a PI call on the play. For whoever didn’t see it, take a look. Judge for yourself.

Just get rid of the challenge altogether. pic.twitter.com/KaK1eIrDRA

It wasn’t overturned, no pass interference.

While this might be the most blatant example of a pass interference call that was missed and then not overturned, it is far from the first time this has happened. Now that coaches can challenge pass interference, that ability has been utilized. However, it isn’t having the effect on the game that coaches, players and fans want.

Since week three of the NFL season, only 4.9 percent (2 out of 41) of pass interference plays have been overturned. The rate has decreased even more since week four with only one PI call be overturned in 33 attempts. That includes plays that were and weren’t called PI on both the offense and defense.

However, Fangio acknowledges that the rule change was purely reactionary from last year’s NFC championship game (see below).

The rule change has proven to be wildly ineffective. Outside of the missed call in the Ravens-Texans game, there have been numerous others. Here’s one in the Arizona Cardinals-San Francisco 49ers game.

Pass interference on the Cardinals. NFL officials continue to be the worst. pic.twitter.com/UrA5eVHn0Q

This penalty was called on Arizona. Cardinals linebacker Joe Walker, the defender on the play, was in legal guarding position. If anything, 49ers full back Kyle Juszczyk, the receiver, should have been called for offensive PI.

On the bright side, there was one PI challenge that was successfully overturned by the New York Jets against the Washington Redskins.

Jets challenged and won a PI call in yesterday’s game versus the Redskins. Since Week 3, coaches are 2 for 41, just 4.9 percent in successfully challenging these calls. pic.twitter.com/tgUXcLmWGg

It hasn’t been a good look for the NFL and its officiating crew so far this season. It’s only year one of the rule though. Maybe, just maybe, if it’s given a season or two to marinate then officials will be able to adapt to the rule and it can be more widely enforced and officiated properly.

But, for now, it’s been ugly for the NFL.

Previous Chiefs Outlast Chargers on MNF
Next Without Tagovailoa, Alabama Will Finish the Season with Mac Jones