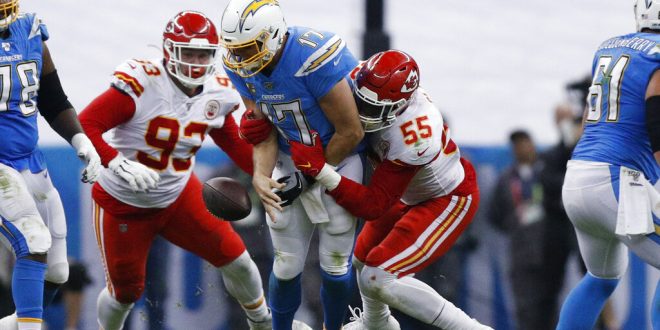 It wasn’t pretty, but the Kansas City Chiefs defeated the Los Angeles Chargers 24-17 last night to maintain their lead in the AFC West.

It was a sloppy game throughout the night as both offenses truly struggled to get anything going. Whether it was the stadium environment in Mexico City or top weapons going down, getting anything on offense was an issue.

The Chargers opened up the scoring with an early first quarter field goal to give them a 3-0 lead. A LeSean McCoy touchdown with just under nine minutes left in the second quarter gave the Chiefs the lead and they wouldn’t let it go from there.

Michael Badgley hit two more field goals in the first half for the Chargers but Kansas City would take a 10-9 lead into halftime.

The Chiefs came out the second half hot opening the half with two touchdown drives. A Darrel Williams rushing touchdown and Travis Kelce reception gave Kansas City a 15-point lead towards the end of the third quarter.

Kelce became the fastest tight end in NFL history to reach 6,000 career receiving yards and did so on 450 receptions. Take a listen to what Kansas City quarterback Patrick Mahomes had to say on the win.

With just under two minutes left in the third quarter, a touchdown to Keenan Allen and two-point conversion pulled the Chargers within seven.

After a sloppy fourth quarter, the Chargers had one last opportunity to tie or even win the game. With less than two minutes to go a no timeouts, Phillip Rivers worked it into the Chiefs’ red zone. With 18 seconds to go, Rivers lofted one into the end zone and was intercepted for the fourth time on the night.

It was an uncharacteristic night for both offenses who are prone to moving the ball. Patrick Mahomes threw for under 200 yards with just one touchdown and an interception while Phillip Rivers was intercepted four times. Also, Rivers threw the ball 52 times and finished with a QBR of 22.8, his worst performance of the season.

The Chiefs defense made plays all night limiting the number of opportunities the Chargers would have. A team usually fueled by its offense, it was their defense that stepped up in the prime time matchup. Here’s what Chiefs Head Coach Andy Reid had to say about the group.

With the win, the Chiefs hold a half-game lead in the AFC West heading. Meanwhile, for the Chargers, they sit at 4-7 and begin to fade out of the playoff picture. Both teams are on bye for next week.