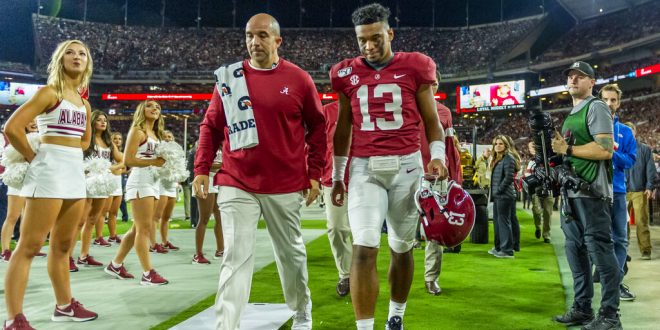 Without Tagovailoa, Alabama Will Finish the Season with Mac Jones

Alabama’s Tua Tagovailoa went down with a scary injury on Saturday against Mississippi State. He was carted off the field and eventually airlifted to Houston for surgery. Tagovailoa is out for the remainder of the year with a dislocated hip.

Jones stepped in for Tagovailoa in a game that was already won. The 5th-ranked Crimson Tide led 35-7 with three minutes left in the first half. However, Jones proved to be a reliable relief player when he made his only start against Arkansas.

He had three touchdowns, 235 yards and zero turnovers against the Razorbacks on Oct. 26.

With only two games left in the season for Alabama, Jones will need to make a statement if the Tide wants to return to the playoffs.

Path to the Playoffs

The tide clearly needs to win out if they want a chance at the playoffs. With Jones at quarterback, they need to do it convincingly. That starts against Western Carolina this weekend. The tide should be able to dominate that game no matter the quarterback. However, the following week is the real task.

The Tide’s last regular season game is their annual Iron Bowl matchup with the Auburn Tigers. The Tigers are ranked 16th in the nation. A dominant game over the rival is crucial to keep Alabama’s playoff hopes alive. Regardless, they need help from other schools.

Alabama fans will hate to hear this, but they need LSU to win out. The Tide’s only loss came at the hands of the number one team in the country, which bodes well for them. LSU will most likely play Georgia in the SEC championship game. A Georgia (4) loss could force Alabama back into the top four and give head coach Nick Saban a chance for another title.

It won’t be easy without Tagovailoa, who has likely played his last game for Alabama.

Once considered to be the top quarterback and likely first player taken in the year’s NFL draft, now there is doubt. Until the severity and length of the injury are made clear, it is to early to predict his NFL future.

According to The Score, Tagovailoa could begin athletic activity in three months. This would mean that Tagovailoa would have a little over a month to show teams what he is capable of before the draft.

The talent and experience is there. However, his injury history is concerning.

Saban has reached out to Tagovailoa in hopes to raise his spirits. However, Tagovailoa has remained positive despite the situation.