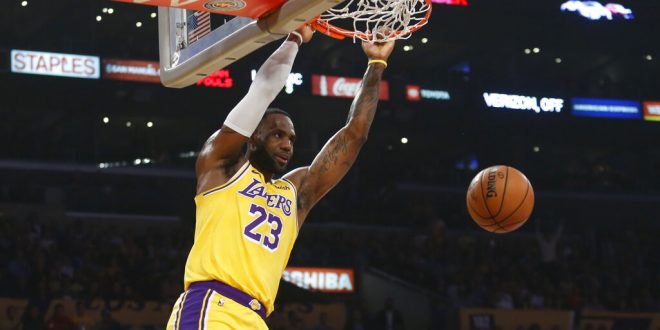 The 34-year-old, Lebron James, made history by becoming the first NBA player to record a triple-double against every team in the league.

He hit 25 points, with 11 rebounds and 10 assists against the Oklahoma City Thunder Tuesday night. The Lakers beat the Thunder 112-107.

After the game, his mother sent an adorable message congratulating her son on his big achievement.

Love you Mama!!! ❤️❤️❤️❤️❤️. Words can’t express how much I do. You’re simply INCREDIBLE

With less than a minute on the clock, the game was 109-107. Kentavious Caldwell-Pope for the Lakers made a 26-foot three-point jumper to give the Lakers the 112-107 win.

Anthony Davis had a big game against the Thunder. He scored the most point of any player on the court with 34. The Lakers are now on a five-game winning streak and are 12-2 on the year.

The Oklahoma Thunder are 5-9 on the year.

Danilo Gallinari, for the Thunder, had a good game putting up 25 points on 7-11 shooting. Dennis Schroder came off the bench to lead the Thunder in scoring by making 12-20 FG and scoring 31 points.

James and the Lakers will be taking on the Thunder again on Friday in Oklahoma. Tip-off is scheduled for 8 p.m. That game will be the first of a four-game road trip in which the Lakers will also face the Grizzlies, Spurs and Pelicans.