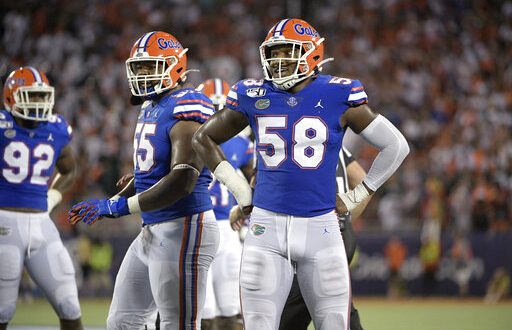 Jonathon Greenard continues to impress as his season comes to a bittersweet ending. The linebacker has risen up and looks to be a top prospect for the 2020 NFL draft.

Steve Russell commented on how hard it is to cover the six-foot-three 260-pound linebacker when he comes around the edge rushing the QB.

Greenard arrived in Gainesville, FL for the 2019 season. Up until the FSU game, the last for his college career, Greenard amassed a total of 46 tackles on the year.

Acclimating to Florida’s defense under Todd Grantham was an easy task for Greenard as Grantham originally recruited him to Louisville. As they were both were apart of the Louisville Cardinals team for the 2015-16 season, they had the benefit of an established relationship. With more experience under Greenard’s belt, Grantham was able to open the playbook and bring more schemes into play for the 2019 season.

Jonathon Greenard stepped on the playing field for the first time wearing a Florida Gator jersey on August 24th when they faced off with the Hurricanes. He and Zuniga demolished the Miami O-line and racked up 12 combined tackles. Florida’s D-line as a whole contained Williams and kept the energy alive with some big sacks.

Greenard appeared early in this game with a HUGE sack. Converting a 2nd & 13 to a 3rd and 21, the explosive play set the tone for the game. Florida’s top three tacklers, including Greenard, combined for just under 30 tackles on the game.

In Florida’s most recent matchup versus the Missouri Tigers, one player stood out. Jonathan Greenard earned the Walter Camp National Defensive Player of the Week after another breakout performance. With this being the second on the season, the possibility of becoming a player of the year arises. His star performance also boosted him to tie for third in most sacks in the SEC.

Greenard put up impressive numbers while at Louisville. His two years with UL accounted for 22 games played with 37 total solo tackles. In the first game of the 2018 season with Louisville, he suffered a season-ending season wrist injury against Alabama. The broken wrist and his graduation let for an opportunity to transfer to The University of Florida.

Jonathan Greenard, along with Zuniga and Perine, all accepted invites to the Senior Bowl where NFL scouts, coaches, and opportunists lie. This manifests the idea of him being a top prospect for the draft.

Senior day comes on November 30th for the Florida Gators. They will face the in-state rival Florida State Seminoles for the last game of the regular season. Along with the last game of the season, it will be Greenard’s last regular-season game of his college career. He looks to come out with a win and remember this once in a lifetime opportunity and his last game in the swamp.

The season finale will be played at 7:30 p.m. at Ben Hill Griffin Stadium. Live coverage is provided on the SEC Network.

Hey! I am a telecommunications major with a specialization in video production. I aspire to film documentaries with extreme athletes traveling around the world.
Previous Alabama Will Try to Bounce Back Against WCU Despite Injuries
Next Bye Week Check-In with Coach Mullen