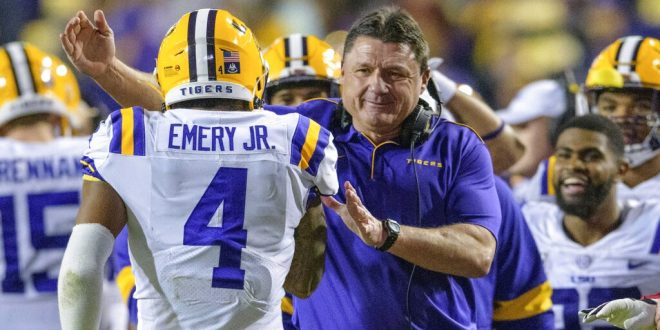 LSU Tigers Looking for Revenge Against the Aggies

This weekend will be an exciting one full of rivalry games in college football. But one team who has definitely been counting the days to face their rival is the LSU Tigers. This Saturday the Tigers will be welcoming the Texas A&M Aggies to the Death Valley looking for revenge.

Last year, the Tigers fell short to the Aggies losing 74-72 in a seven-overtime thriller. This game was also the highest-scoring game in a D1 game at the FBS and FCS level.

LSU has had an outstanding season with a strong execution from both the defense and offense. According to ESPN’s FPI, the Tigers have an 83.1% chance to beat the Aggies. But even with those high odds, LSU Head Coach Ed Orgeron says that their only focus is to redeem themselves from last year.

The game is set for 6 p.m. Central Time.

LSU is one of the few undefeated teams left in college football and looks to finish their regular season 12-0. If successful, this would be the first time in almost a decade that the Tigers finish with a perfect record.

The Tigers were also crowned as the SEC West Champions after defeating the Arkansas Razorbacks on Saturday. This is the first time they have claimed the title since 2011. They will now face Georgia on December 7th to compete for the SEC Championship.

The Tigers’ offense has seen a lot of improvement from last year and it has been the key to LSU’s successful season. And if evidence was needed, just have look at the results after their match against Arkansas.

Three Tigers were the highlight of that game and even broke some records. Starting with senior quarterback Joe Burrow, who moves up to third in the all-time passing yard list with 6,908, around 4,000 just this season. He becomes the fourth SEC quarterback to accomplish this.

Another player breaking records is junior tight end Thaddeus Moss. He now has 36 catches, setting the record for most catches by a tight end in a season in LSU history. Junior running back Clyde Edwards-Helaire also had a big night rushing for 188 yards. He also finished with three touchdowns and caught seven passes for 65 yards. Edwards-Helaire became the 21st LSU running back to rush for 1,000 yards in a season.

The Aggies currently have a 7-4 record, 4-3 in the conference. But those four losses are not unexpected with A&M having one of the toughest schedules this season. They have faced two then-ranked number one teams (Clemson and Alabama) and will now face their third when they travel to Baton Rouge. They become the first team to face three no.1 teams in a season.

Aggies head coach Jimbo Fisher doesn’t look at this schedule as a disadvantage; he sees it as an opportunity.

“Is it tough? Is it challenging? Yes. I’m not saying it just because, hey, that’s our schedule, but we’ve got a great opportunity where we’re at while we’re building this program.”

Their last game was against the Georgia Bulldogs and they did not have the desired outcome. After a tough fight in Athens, A&M fell to the Bulldogs 19-13. Many of the mistakes that led to their defeat were within their control. False starts and delay of games in crucial times shut down their chances of getting the win.

Junior quarterback Kellen Mond will play a key part in the Aggies offense on Saturday. He was part of Texas A&M’s victory last season where he outscored Burrow in yards, finishing with 287 against Burrow’s 270. He also threw for six touchdowns compared to Burrow’s three.

Mond currently has a 63.5 completion percentage and has thrown for 2, 710 yards so far. So far he has thrown for fewer touchdowns this season with 19 as compared to his 29 last season.

Camila is a senior at the University of Florida, who served as a beat writer for the women's basketball team from 2019 until the 2021 season. She was also a beat writer for the Gators football team during the 2020 season. Camila is also WUFT's news director as well as a sports reporter/anchor.
@CamilaMaffuz
Previous Monday Night Football Preview: Ravens v. Rams
Next Florida Gators: Mullen Talks FSU Rivalry, Senior Day and Winning at Home 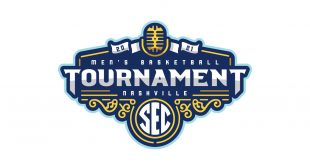