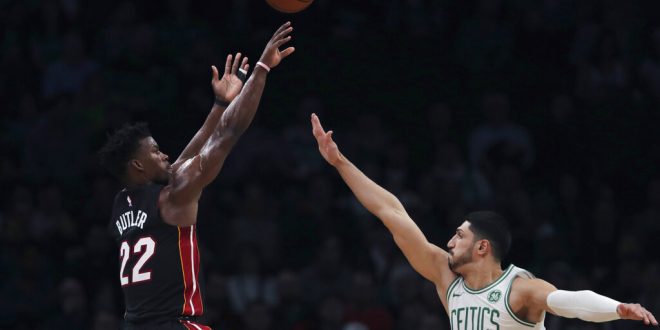 Miami is “Heating” Up

Six years after the breakup of the Big Three, the Miami Heat have finally built themselves back into Eastern Conference contenders.

Already, there have been road victories over the Milwaukee Bucks, Brooklyn Nets and Toronto Raptors. Perfection at home is just the cherry on top of an encouraging start to the season.

The Heat’s overtime win over the Toronto Raptors on Tuesday was big-time. Add that to their 131-126 win over the Milwaukee Bucks, and you’ve got yourself an impressive resume. The Heat has now given two top-five teams, Milwaukee and Toronto, their only home losses so far on the season.

Fall to the Celtics

Miami is now 15-6 after a loss to the Boston Celtics on Wednesday. The loss came immediately after the Heat’s big win in Toronto and on the third game of their three-game road trip.

The team has struggled to find success on the back end of back-to-back’s this season. Four of the Heat’s six losses have come on the second night of a back-to-back set.

After recording his fifth triple-double of his career against Toronto on Tuesday, Jimmy Butler finished Wednesday’s game against the Celtics with a season-high 37 points. He also tied a career-high with six made three-points during the game. Butler carried the Heat against the Celtics with the next leading scorer being big man Kelly Olynyk with 12 points. He outproduced the next three Heat scorers combined that night.

Butler is currently averaging 20.1 points per game for the Heat. He’s shooting 43.6 percent from the field and 32.1 percent from the three-point. The 30-year-old has popped off for 20 points in three straight games now.

After a disappointing end to the Heat’s 3-game road trip, Miami has four home games in a row to look forward to. They’ll take on the 6-13 Washington Wizards tomorrow at 8 p.m. in American Airlines Arena. They are looking to protect their perfect home record as they take on Bulls, Hawks and the Lakers in the next week.