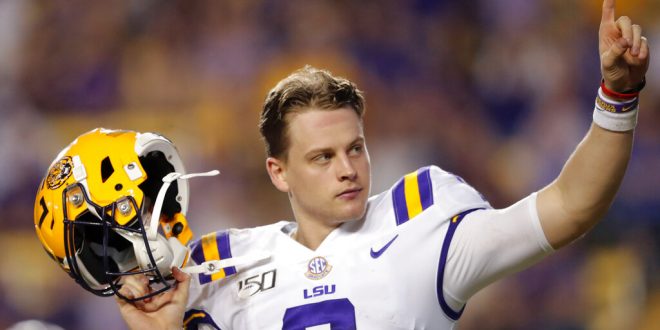 The undefeated LSU Tigers and one-loss Georgia Bulldogs will meet on Saturday in Atlanta for a SEC Championship holding large playoff implications. A win for either team would nearly guarantee a spot in the College Football Playoff.

The LSU Tigers offense has been unbeatable under the lead of quarterback Joe Burrow. Furthermore, the Tigers’ offense ranks at the top of the SEC in both passing and receiving yards.

With a strong offensive and defensive line, Georgia has the strength up front to protect quarterback Jake Fromm. In addition, the Bulldogs strong defensive front can put pressure on Burrow.

One of the most interesting matchups in Saturday’s game will be the quarterback battle between Burrow and Fromm.

Tough, physical and cut it loose.

According to Georgia head football coach Kirby Smart this is just a few ways to describe the Tigers under head coach Ed Orgeron.

No one in college football has been able to top the toughness of Tigers, let alone replicate the numbers they produce on offense.

LSU dominates the SEC in offensive statistics leading the conference in passing yards, receiving yards, points per game and total offense. Furthermore, the Tigers rank second in college football for total yards and yards per game.

The Tigers have proven their ability to be an explosive team according to Smart.

Topping four top-ten teams throughout the season has proven the Tigers know what it takes to defeat talented teams.

The Bulldogs are predicted to be a seven point underdog but have a confidence under Fromm who is entering his this third consecutive SEC Championship. In addition, Georgia is backed by a talented defense that ranks fourth in college football for total defense, the Bulldogs have the strength needed to top the Tigers.

According to Orgeron the Bulldogs defense will be one of the toughest that the Tigers have faced all season.

The Georgia offensive and defensive line will be one of the largest strengths for the Bulldogs. The toughness of the defensive line is proven by the fact the defense has allowed only one rushing touchdown all season.

Orgeron stated that this Georgia offense and defensive line will be the best that the Tigers have faced all year.

Who to Watch For LSU

QB Joe Burrow: The Heisman front runner leads the SEC in total passing yards with 4,366 yards. Furthermore, Burrow’s ability to extend plays and accuracy as a passer make him one of LSU’s biggest assets.

WR Ja’Marr Chase: The sophomore has 1,457 and 17 touchdowns on the season, leading all other receivers in the SEC. With 70 receptions on the season, the dynamic between Burrow and Chase has been one of the most efficient this season.

Who to Watch For Georgia

QB Jake Fromm: Fromm is recording his lowest number of interception in his career while finding ways to lead Georgia over opponents. Additionally, the quarterback records 2,385 passing yards and 21 touchdowns.