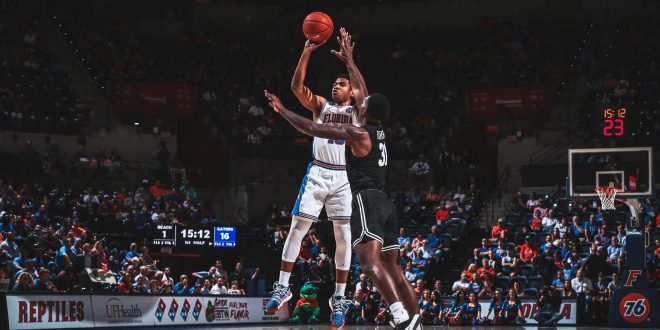 Gator sophomore Noah Locke got his first career double-double with 16 points and 10 rebounds.

Andrew Nembhard also set a career high in assists with 13.  Turnovers got the best of Long Beach State with 17. The Gators had just 10.

Gorjok Gak saw action for the first time since Florida’s game against U Conn, over a month ago. All four of Florida’s big men saw playing time today. This gave Kerry Blackshear Jr., who was Florida’s go-to big man, more time to rest, and ultimately up his performance.

Playing time was spread out among several Gator players with only Andrew Nembhard playing over 3o minutes in the contest.

The Gators got the game going early with a three from Noah Locke, followed by a steal from Andrew Nembhard which led to a layup from Omar Payne.  Just three minutes into the game, it seemed this would be a good game for the Gators from behind the arc. Blackshear sank his first three of the game and shortly after Locke got his second.

The momentum that Florida found against Providence seemed to have returned. 13 minutes into the game and the Gators had drained seven 3’s and were shooting 58.3% from the field.

That momentum was not on the side of Long Beach State, however, and at the 13-minute mark they had made only two 3’s while hitting just 36.8% of their shots.

Everything seemed to be connecting for the Gators during the first half. Whether is was their passing, scoring or defending, the Gators held Long Beach State to just 31 points in the first half while they put up almost 6o in building a 59-31 advantage.

With those 59 points, three Gator players were able to reach double figure scoring in Blackshear, Keyontae Johnson and Locke.

The second half began similar to the first with a quick three from Johnson to get the Gators going. Less than six minutes into the second half and the Gators had already added 21 to their halftime score.

Before a three-point basket by Michael Carter III, LBSU had been on an over four-minute scoring drought. The three came with a little over 12 minutes left in play.

With over four minutes still left in the game, six gators already had double-digit points in Johnson, Blackshear, Locke, Payne, Johnson and Ques Glover. It wasn’t long after this that a seventh Gator joined the group in Tre Mann.

A usual starter for the Gators, Scottie Lewis, was out of the game today. Lewis suffered a concussion during practice earlier in the week.

Lewis averages 8.1 points per game and 1.5 blocks. The freshman Payne received his first start in a Gator uniform in place of Lewis.

Florida, now 8-4 on the year, will remain at home, where they will open up SEC play against Alabama. This will be their first game of the new year on January 6 at 6 pm.