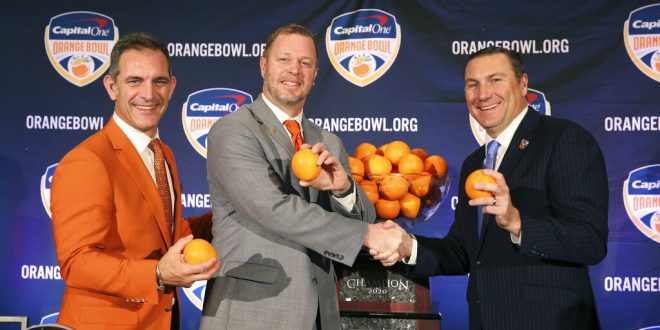 The No. 24 Virginia Cavaliers will make their first New Years Six appearance Monday, taking on the No. 9 Florida Gators in the Capital One Orange Bowl.

The team won its first ACC Coastal Division title this season, earning it a spot in its first conference championship game. The match up with Clemson came about a week after the Cavaliers snapped a 15-game losing streak against rival Virginia Tech.

Coach Mendenhall recognized this match up with Florida as a big step in his team’s growth.

“When you consider the University of Florida with two 10-win seasons, that’s hard to do.” Mendenhall said, “We’re intentionally pursuing and hunting down that tier. The more games we get to play and earn the right to play in on the stage that we’re currently on, the faster the program accelerates. They’re essential.”

This is the second straight year Virginia has faced an SEC opponent in a bowl game. Last season, the Cavaliers beat South Carolina, 28-0, in the Belk Bowl.

As a starter at Virginia for the past two years, Bryce Perkins has not only proved himself as an elite, dual-threat quarterback but as the heart and soul for a team making its way up the rankings.

“I knew this group was special. But the things we have accomplished and are accomplishing, I never knew we would do it this fast. And I never knew how much I would be a part of it, as far as invested physically and emotionally.” Perkins said, “This program is going to be a part of me forever, for here on out.”

Perkins has accounted for 35 touchdowns so far this season for a total of 3,960 yards. Virginia was the first team this season to gain more than 300 yards on the Clemson defense in the ACC championship game. Perkins has made an immense impact on the Cavaliers offensive productivity since his arrival last season.

Virginia’s top kick returner and wide receiver Joe Reed sat out in the ACC Championship Game against Clemson but is expected to return for the final game of his career Monday.

Reed has been key not only to the Cavaliers offense, but to its special teams too. He holds the Virginia career kick return yardage record, with 3,010 yards, and the school record for kick returns for touchdowns, with four.

The Virginia Cavaliers (9-4) will take on the Florida Gators (10-2) at Hard Rock Stadium in Miami Gardens on Monday at 8 p.m.