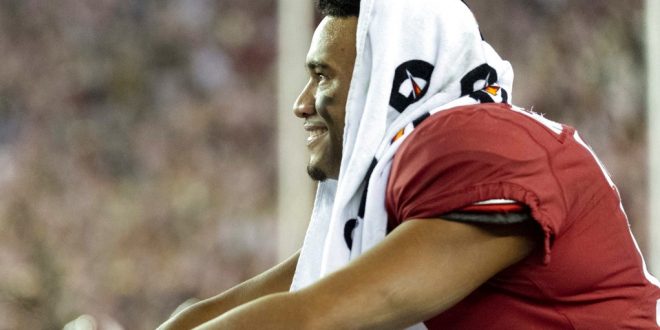 Alabama quarterback Tua Tagovailoa has made his decision to forgo his senior season with the Crimson Tide. The star quarterback declared for the NFL Draft in a press conference on Monday. Tagovailoa suffered a gruesome hip injury against Mississippi State on Nov. 16 and underwent surgery soon after.

In the press conference, Tagovailoa shared that his love for the university, the fans and his team ran deep. His decision is filled with guidance and prayers from his coaches, parents and doctors. Entering the press conference without crutches, which have been a staple in recent weeks, Tua called his decision “especially hard.”

For now, he plans to focus on his rehab. He will wait to decide if he is able to participate in pro-day for interested NFL teams. This decision will be left up to the training staff and doctors. He is scheduled for a re-check and evaluation of his progress around the three month mark.

He makes the comparison to his hip injury being viewed similarly by teams as a knee injury. The biggest concern for teams is questioning whether he is able to move around and reach the level of play he maintained before the injury, according to Tua.

Holding his own among other decorated Alabama legends by most standards, Tagovailoa who was a Heisman finalist a year ago,  will leave a legacy of grace and class and some decent records too. Under center for the Crimson tide, Tua led the team to a national championship in his first game as a true freshmen and set the standard for the FBS career pass efficiency mark 199.5.

Head coach Nick Saban referred to his quarterback as an “unbelievable positive spirit.” He spoke to the incredible impact that he has on the team and the contributions off the field and his significance to the program.

Tagovailoa thanked his teammates, “from the starting lineup to the scout team”  for all the love, laughs, and hard work over the past three years.

What’s Next for the Tide?:

Though Tua is departing, he is leaving the Tide in good hands with quarterback Mac Jones. The redshirt sophomore threw for 13 touchdowns in his absence and went 3-1 to end the year. However, the quarterback room doesn’t stop there with Tua’s younger brother Taulia Tagovailoa, who will be a sophomore in the fall, along with the No.1 ranked dual-threat incoming quarterback Bryce Young. All three will have the opportunity to fight for the starting role in the spring.

However, Tagovailoa isn’t the only notable player departing early from the program. Two offensive players in Jerry Jeudy (wide receiver) and Jedrick Wills Jr. (offensive lineman) as well as defensive player  Xavier McKinney (safety) will be entering the NFL Draft.

On the flip side, the Tide has kept a few stars who have decided to return to Tuscaloosa for their final season. They include offensive lineman Alex Leatherwood, linebacker Dylan Moses and wide receiver DeVonta Smith. All three had projections to be first-round picks in this year’s NFL draft.

For now, Tagovailoa says goodbye to Alabama and soon he will say hello to the NFL and potential seven figure salary. But, until then he just focusing on getting better.

Previous Marco Wilson Will Return for 2020 Season
Next Around the conference: SEC play picks up