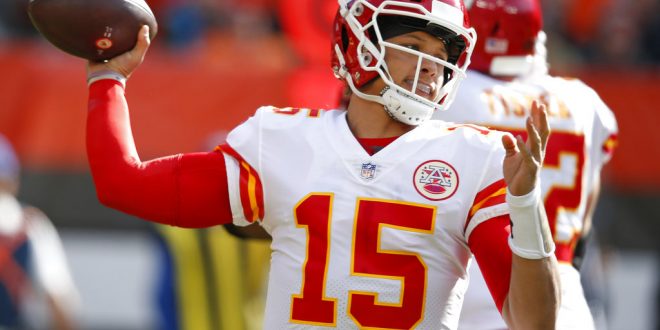 FILE - In this Sunday, Nov. 4, 2018 file photo, Kansas City Chiefs quarterback Patrick Mahomes throws during the first half of an NFL football game against the Cleveland Browns in Cleveland. What some are calling the NFL's Game of the Year already has made huge headlines by being moved out of Mexico City because of poor playing conditions. Chiefs-Rams is back in Los Angeles. (AP Photo/Ron Schwane, File)

The Cheifs and Texans Face Off in NFL Divisional Round

This Sunday, the Kansas City Chiefs host the Houston Texans for the AFC Divisional Round. The Chiefs previously won four consecutive AFC West titles but never made it to the Super Bowl during that time. Houston makes its first appearance in the divisional round. Both teams previously met in week six, resulting in a 31-24 victory for the Texans. The chiefs were down five starters that game. During the regular season, Kansas City started improving their defensive performance. From week 11 on they had a six-game winning streak.

The team is heading into this weekend’s matchup fresh off a bye week. Kansas City Quarterback Patrick Mahomes explains that he kept an open mind and watched a variety of teams to prepare for the division round.

Quarterback Deshaun Watson addressed his thoughts on playing opposite of Mahomes this weekend.

With Watson acting as a powerhouse for his team, head coach Bill O’Brien highlights some of Watson’s strengths on the field that has led to their success.

Mahomes finished the 2019 season with 4,031 yards, 26 touchdowns, and five inceptions and is credited to leading the Chiefs to their second straight 12-4 record and their fourth straight division title. Watson ended the season with 3,852 passing yards, 26 passing touchdowns, and 12 inceptions and was a key player in leading his team to the wild card win against the Bills. In the game, Watson led a comeback from being behind 16-0 to the Bills to win 22-19 victory, the first playoff win of his career.

The Texans are travelling to Arrowhead Stadium to face Kansas City on Sunday with kickoff at 3:05.