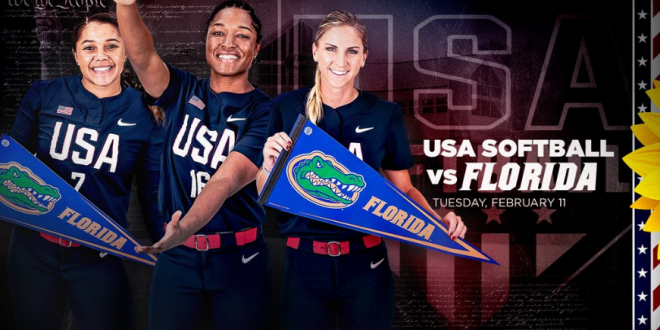 Three former Gators will return to Katie Seashole Pressly Stadium to face Florida as members of Team USA in an exhibition game on Feb. 11. Michelle Moultrie, Aubree Munro and Kelsey Stewart will have the chance to play at their Alma matter one more time before representing the US in the 2020 Tokyo Olympics.

Both teams made the announcement on Tuesday morning through its twitter pages. This exhibition game is just one of the multiple “Stand Beside Her” tour stops. This tour features match-ups that serve as extra training and competition for the softball team in preparation for the Tokyo Olympics.  It also encourages fans to show support for the team as they prepare for the summer.

The Florida Gators will host this exhibition game and it is set to start at 6 pm.

The three Gator greats secured their spot on the US roster last October during the selection trials. Moultrie, Munro and Stewart will be the first softball players in program history to represent the Gators in the Olympics.

In their time with the Gators, the trio secured multiple titles and solidified themselves as one of the best. They helped Florida achieve 445 wins and a .885 winning percentage. They also brought home two national championships, four SEC titles and six Women’s College World Series appearances.

Softball head coach Tim Walton said he is excited to host the team and to be welcoming back the trio.

“Michelle, Aubree and Kelsey have given so much to our program throughout the years as players and have worked so hard for this opportunity to represent Team USA at the Tokyo Olympics in 2020,” Walton said. “I can’t think of a better way to send them off than to give them the chance to play in front of Gator Nation here on this field at KSP Stadium one more time.”

Two of them also showed their excitement for this game through their social media.

Munro and Stewart both shared the announcement on their twitter page.

Moultire said she was happy about getting to play at Florida one more time.

“It will be such an honor to go back and play at the University of Florida. I’m excited to experience my UF family and my USA family both at the same time,” Moultire said. “There are so many great people in Gainesville that have impacted my life and I can’t wait to see everyone at the tour stop!”

Camila is a senior at the University of Florida, who served as a beat writer for the women's basketball team from 2019 until the 2021 season. She was also a beat writer for the Gators football team during the 2020 season. Camila is also WUFT's news director as well as a sports reporter/anchor.
@CamilaMaffuz
Previous Russell Westbrook Returns to OKC, Chris Paul and Thunder Steal the Show
Next The Cheifs and Texans Face Off in NFL Divisional Round