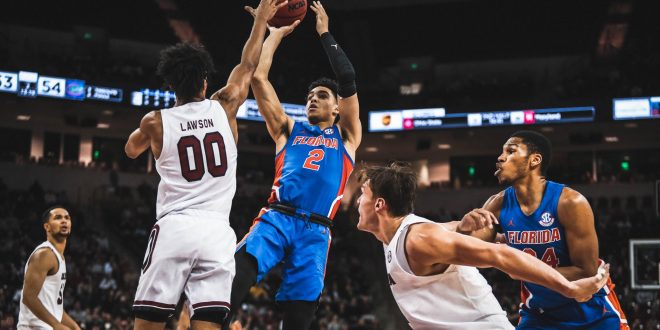 After starting their SEC schedule 2-0, the Florida Gators men’s basketball team travels to their second straight Columbia to take on the Missouri Tigers.

This is Florida’s second straight road game, and third straight conference game as the Gators dive deep into their SEC schedule for the season.

Florida is coming off of a road win in Colombia, South Carolina where sophomore guard Andrew Nembhard scored 21 points and had 10 assists. Additionally, this was Nembhard’s first career double-double, and second straight game scoring over 20 points.

"…he's a tough kid…& he continues to improve…" -Coach on the PG#GatorsHoop pic.twitter.com/yuB24gStXv

Missouri is coming off of a tough loss to the Tennessee Volunteers where the Tiger offense stalled in the last six minutes. Additionally, the Tigers only mustered up a 35.2 field goal percentage and lost despite Tennessee committing 21 turnovers.

The Tigers are looking to end a two-game skid and secure their first win in conference play this season. Missouri would be 1-2 in the SEC if they beat the Gators.

Florida head coach Mike White looks to secure his 100th win as the head coach of the Gators with a win over Missouri. Coach White would be the 2nd fastest coach in Florida Gators history to reach 100 wins, behind only Billy Donovan.

Additionally, White achieved his 200th career win as a head coach against South Carolina on Tuesday.

White is also 4-0 in his career against Missouri. He will look to keep that streak alive on Saturday in Columbia.

Dru Smith leads the way for the Missouri Tigers on offense. The junior guard from Evansville, Indiana averages 11.3 points per game along with 4.4 rebounds and 4.2 assists per game.

Andrew Nembhard has led the way for the Gators throughout the last three games. Against Long Beach State, he had 13 assists, while in the last two games Nembhard has scored over 20 points. Also, Nembhard leads the team in minutes with 34.8 per game. He is able to be a floor general and get his guys in the right places to succeed.

According to Mike White, the team has been playing through Nembhard for a few games now.

“He’s playing with a high level of confidence. He’s really seeing the game well, making great decisions. Obviously, we’re playing through him a lot and he’s taking advantage of those opportunities.” -Mike White on Andrew Nembhard

Nembhard is humble. When asked about what’s gone right for him in the last few games, he deflected the success onto his teammates.

“I think it’s just how the team’s playing. I think we’re just moving the ball more, kind of looking for the best shots. I think it just ended up where I’ve had an opportunity to make the play.” -Nembhard on the team’s recent success

He will look to continue his stretch of 20 point scoring performances against the Tigers on Saturday.

Television coverage of the Gators’ game against Missouri starts at 8:30 p.m. on the SEC Network.

Steven Walker is a beat writer for ESPN Gainesville and is currently studying Journalism & Sports Media at the University of Florida.
@swalker_7
Previous The Cheifs and Texans Face Off in NFL Divisional Round
Next Gators Open Gymnastics Season With a Win