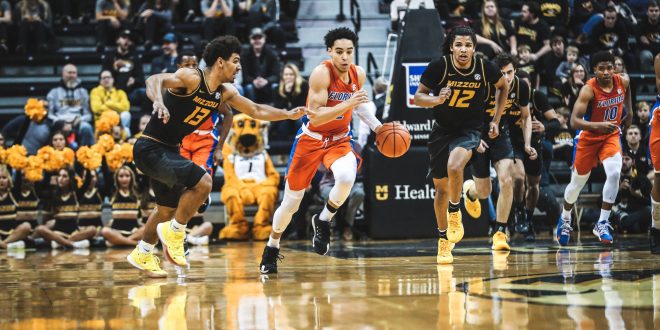 A snowstorm would not stop the Missouri Tiger men’s basketball team, as they steamroll the Florida Gators 91-75 on Saturday in Columbia, Missouri.

A sparse Missouri home-crowd watched the Tigers lead for all but the first 12 seconds of the game and deny Gators’ head coach Mike White his 100th win at Florida. Missouri led by 24 at one point, which is the Gators’ largest point-deficit of the season.

Kerry Blackshear Jr. led the Gators with 22 points, 10 of which came from the free-throw line. Noah Locke contributed four 3-pointers to a total 12 points on the night.

Florida started out sluggish, not scoring a field goal until 15:57 when Blackshear made a contested shot off of the glass and drew a foul. Until that point, Florida was 0-7 from the floor with only 1 point courtesy of Omar Payne and the free-throw line.

Dru Smith took the reigns early for the Tigers with 14 points through the first 20 minutes.  He helped carry Mizzou to their season-high in first-half points with 51; prior to Saturday, Mizzou averaged 66.7 points per game.

The Tigers hit eight 3’s in the first half. Coming into their match up with Florida, the Mizzou averaged seven 3’s a game. They would finish with 12 three-pointers in the game.

With the #Gators in the bonus and Mizzou in foul trouble, a comeback opportunity comes to light. Mizzou cannot suffocate on D and risk losing players and letting Florida shoot FTs now.

Florida entered the bonus with 13:20 left in the second half. This changed the pacing of the game entirely, as Missouri had to ease off on defense. The Tigers would not give way, as the closest the Gators got to reclaiming the lead was 11 points.

Comeback hopes came and went as the Gators came out shooting at the beginning of the second half. Missouri would bury those hopes with long scoring runs that left Mike White’s team in the dust.

For the game, the Tigers shot 62% while the Gators only mustered up a 38% clip from the floor. The most eye-opening statistic is the Tigers’ shooting 63% from three-point range. On the season, Missouri only shot 31% from range coming into Saturday’s match up.

Florida never really got their footing in the game. The Gators came out of the gate slow, and they never could catch up to Missouri throughout the game.

Florida comes home to another SEC game against Ole Miss on Tuesday at 7 p.m while Missouri travels to Mississippi State to take on the Bulldogs on Tuesday at 9 p.m.

Steven Walker is a beat writer for ESPN Gainesville and is currently studying Journalism & Sports Media at the University of Florida.
@swalker_7
Previous Gators Open Gymnastics Season With a Win
Next Women’s Basketball Drops SEC Home Game Against Kentucky