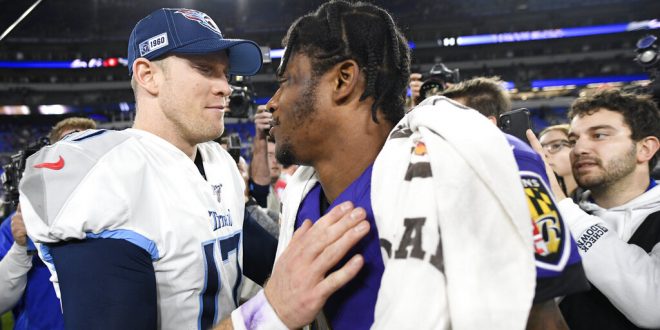 Ravens are Still in Disbelief

The Baltimore Ravens are still in disbelief after the 28-12 loss against the Tennessee Titans.

The Ravens had a record-setting season (14-2), what happened? Quarterback Lamar Jackson may have just had his worst game of the season. He accounted for three turnovers, two interceptions and a fumble. Jackson was also sacked four times. This loss is going to sting for a while. “It just seemed like it was one big dream, and it wasn’t really happening,” said Ravens cornerback Marlon Humphrey.

They were just simply outplayed and they know that.

Lamar Jackson had a total of 508 total yards with 365 passing yards and 143 rushing yards. This was made up of 95.8% of the total yards on offense. This just shows the team was not playing as a whole and never was in sync.

Another important factor in this unfortunate loss was a calf injury of running back Mark Ingram two weeks before. He was back in the game and only carried 22 yards in his six plays.

With such young players, they are going to take many steps into developing their next season to reach the Super Bowl. But this was not only Lamar’s fault. The Titans defense made the plays necessary while the Baltimore offense only scored one touchdown and two field goals. The biggest target from the Ravens during the game was Tennessee’s running back Derrick Henry. He leads the NFL in rushing yards with 1,540.

"The @Titans get all my respect for this win. And it wasn't just @KingHenry_2, who's having an all-time postseason run. The Ravens came in 8-for-8 on 4th and 1 plays. The Titans D stuffed them twice and scored on the ensuing drives. Tremendous." — @PSchrags pic.twitter.com/TPcdjfvjB9

The Titans just flat out outplayed the Ravens on every part of the game. The Titans defense and offense held each other in check and that’s how they beat the 14-2 Ravens when they were just 9-7.

On the bright side, after all the criticism and upset, Lamar Jackson is expected to receive the NFL’s MVP award. The Ravens had the best players, the best passing offense and among the best defense in the NFL.

The Ravens look to rebuild in the off-season.