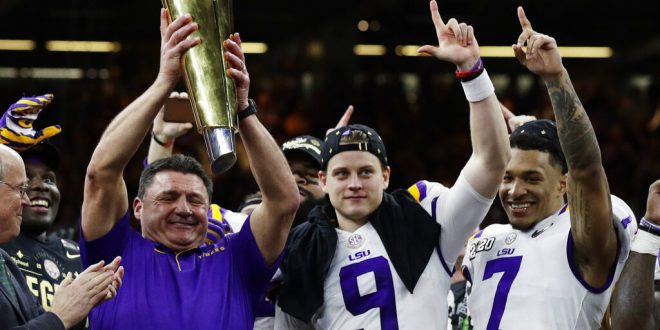 While Bourbon Street reeked of the all familiar smell of cheap booze, instead of jazz music piping from street performers, bar-goers belted Queen’s “We Are The Champions” in the street. Meanwhile, a dozen blocks over in the depths of the Superdome, the smell of tobacco leaves masked the smell of sweat as the LSU Tigers took drags off of championship stogies following LSU’s 42-25 victory over the Clemson Tigers to capture the 2020 College Football Playoff Championship.

More importantly, instead of forgetting the night — like most New Orleans’ visitors do, it will be a night that LSU players, coaches and fans will never forget. On second thought, the 2019-20 LSU season as a whole will be something no one in America will be forgetting anytime soon.

To be frank, the amount of hardware the LSU Tigers brought to Baton Rouge this season is staggering.

Also occupying the trophy case in Baton Rouge is Ja’Marr Chase’s Biletnikoff Award.  And we can’t forget Grant Delpit’s Jim Thorpe Award. LSU’s offensive line also pulled their weight in winning the Joe Moore Award. Ed Orgeron will also have a trophy or two to show off having won the Home Depot Coach of the Year Award as well as the AP Poll giving him the same recognition.

But the most important enshrinement doesn’t recognize one man or position — but rather an entire roster. And on Monday night, the everyone on the Tigers’ roster earned a place in the trophy case. Stretching 3-feet tall, the College Football Playoff Trophy will rise above the others in the case — just as the LSU Tigers rose above everyone else in the country all season long.

In the 2019-20 season, the LSU Tigers became the first team in SEC history to go 15-0. And heading into the season, the likelihood of going undefeated looked grim.

Ahead of the Tigers was a schedule that looked as treacherous as a Louisiana bayou at night. According to fbsschedules.com, the LSU Tigers’ 2019-20 season was ranked second in terms of strength of schedule. Some notable opponents:

7 were ranked in the top 10 when they played.

Quarterbacks in the state of Louisiana love smashing records — one touchdown pass at a time. Earlier this year, the New Orleans Saints’ Drew Brees surpassed Peyton Manning for the most career passing touchdowns in the NFL.

On Monday night, Joe Burrow captured a couple of records of his own. With a five passing-touchdown effort against Clemson, Burrow tallied his 60th passing touchdown of the season — the most a college quarterback has ever accounted for.

Burrow’s six total touchdowns on Monday also helped him etch his name in the College Football Playoff record book with the most touchdowns accountable for in a playoff game.

With the storied career that Burrow has had, it’s no wonder that his high school back in Athens, Ohio will be renaming the football stadium after him. However, it seems that Athens won’t be the only place claiming the 2019 Heisman winner as the City of Baton Rouge will be calling Burrow their adopted son for years to come. And for Burrow, he wouldn’t have it any other way:

Well, there is no more football to be played — at least not for a couple of months. So, as they say in New Orleans, “Laissez les bon temps rouler.”

Ainslie is a journalism major at the University of Florida where she specializes in Sports Media. Her main passion is college football as it was a huge part of her childhood. Ainslie serves as a current correspondent for the Ocala Star-Banner, a newspaper for the Ocala, Florida area. She currently covers Marion County high school sports.
Previous Ravens are Still in Disbelief
Next How the Texans are overcoming stunning loss to the Chiefs

In their third meeting of the season with the Tampa Bay Buccaneers, the New Orleans …