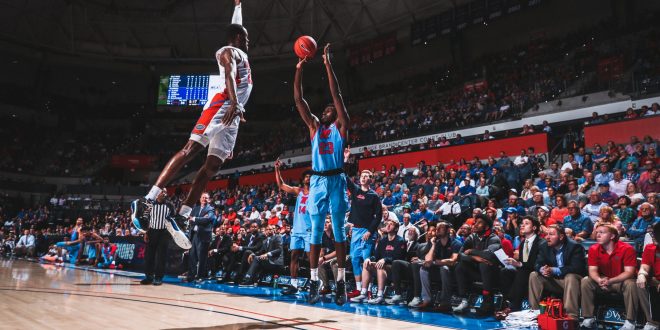 Scottie Lewis swats a shot into the stands against Ole Miss on Tuesday, Jan. 14, 2020. (Credit @GatorsMBK on Twitter)

The Florida Gator men’s basketball team trounced the Ole Miss Rebels 71-55 on Tuesday. This comes fresh off of a harsh loss to Missouri on Saturday, Jan. 11 that saw the Gators lose by their largest margin all season.

Ole Miss’ KJ Buffen led all scorers with 20 points in 31 minutes. The team’s leading scorer on the season, Breein Tyree, didn’t play due to a knee injury that happened in practice the day before.

Florida’s Keyontae Johnson led the Gators with 15 points and 6 rebounds. He, Kerry Blackshear Jr. and Andrew Nembhard all topped double-digit points and played pivotal parts in the team’s blowout win.

Noah Locke finished with 9 points. He also broke the team record for most consecutive games with multiple three-pointers made (13 games). The record was previously held by Brett Nelson (2000-2001) with 12 consecutive games.

Gators’ head coach Mike White earned his 100th win in Gainesville. White is the second-fastest coach and the fifth total coach in program history to reach 100 wins. His pace is behind only the legendary Billy Donovan, who won a total of 467 games in his 19 season at Florida.

Here is what White had to say about his accomplishment.

Gators came out with an early 14-4 lead, passing and shooting with ease. This would soon come to pass as the Rebels stormed back and retook the lead minutes later.

Much of the Rebels’ success early in the game came from Blake Hinson. His 12 points in the first half helped Ole Miss bring the game back to being a competitive contest.

Florida would not trail for long, as they hit nine of their next nine shots to surge back into the lead. By halftime, the Gators led by 12 off of a 13-2 run to close out the half. Johnson and Nembhard combined for 21 points in the half and helped play a key role in the team’s resilient play in the first 20 minutes.

According to Johnson, the team’s resiliency comes from experience.

A key stat in the first half was the differential in assists. Florida, behind Nembhard’s excellent passing, had 9 first-half assists while Ole Miss only had one. That means that 50% of the field goals scored by the Gators in the first half came off of an assist.

Here’s what the refs called as a tech on Ole Miss’ KJ Buffen. #Gators pic.twitter.com/wy6qFhb25O

Emotions ran high as the Gators’ lead continued into the second half. With 14:00 left, Florida’s Omar Payne and Ole Miss’ KJ Buffen were involved in an incident that landed Payne with a flagrant foul and Buffen with a technical foul.

Florida continued to dominate in the second half. The Gators outscored the Rebels 31-27 in the last 20 minutes, and Ole Miss finished with a 29% shooting percentage in the second half. Much of the Rebel’s efficiency offensively came when Coach White decided to play younger players in the waning minutes of the game.

The ball moved early and often as the Gators racked up 12 assists for the game. The majority of these came courtesy of the Canadian-prodigy Nembhard, who racked up 6 assists.

Florida’s free-throw struggles continued, as the team shot a collective 61% from the charity stripe. While this did not impact the game, something like this could impact a close game down the line.

The Gators doubled Ole Miss’s points off of turnovers with 26 and had four times as many assists on the game.