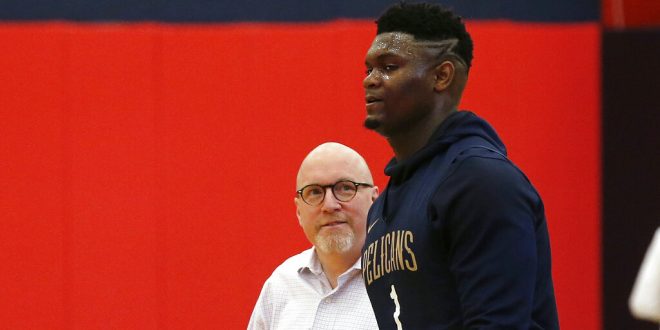 Zion Williamson is set to return to the court, and soon. The number one overall draft pick in the 2019 NBA Draft has been sitting on the bench the entire season due to injury. He suffered a torn lateral meniscus during the preseason for the New Orleans Pelicans. That injury was a major setback for the Pelicans and a disappointment for NBA fans. But now, fans can expect his return next week. Pelicans executive vice president of basketball operations David Griffin made the announcement after the team’s practice Wednesday. Williamson will return on Jan. 22, a home game for the team as they take on the San Antonio Spurs.

Zion Williamson underwent surgery on his meniscus on Oct. 21. At the time, it was estimated he would need six to eight weeks to recover. This anticipated return date would mark just over 13 weeks since surgery. Griffin made clear that the long recovery process was necessary. He didn’t want to risk losing the highly-touted player to injury again.

Griffin also believes that the lengthy recovery process has improved Williamson’s physicality, making him an even larger asset to the team.

David Griffin on one benefit for Zion Williamson of #Pelicans being methodical and patient with his process of returning: "I really believe very strongly he is a radically improved physical version of himself, in ways that frankly we took the extra time to ensure."

He returned to full practices on Jan. 2 and played in 5-on-5 drills on Jan. 7. Some are wondering why he didn’t return for the team sooner. Griffin said the simple reason is that there wasn’t enough time for him to get full practices in. The Pelicans just finished a stretch of seven games in 11 days. There wasn’t a chance for him to be working out with the team.

Pelicans head coach Alvin Gentry elaborated on this, saying that having other injured players hasn’t helped.

On that injury list includes JJ Redick and Brandon Ingram, who are day-to-day with hamstring and knee injuries, respectively. Ingram, the team’s leading scorer, is still probable for their game tonight against the Jazz.

The big question on fan’s minds: what kind of impact is Zion going to have on the team? The hope is a highly positive one.

Williamson averaged nearly 24 points in his four preseason games in October. And right now, the Pelicans need all the help they can get. Their current record is 15-26, and they’re sitting near the bottom of the Western Conference standings. With team leaders like Redick and Ingram injured as well, having Williamson on the court could have a huge impact on the offensive end.  But now, his return date now set. It will be interesting to see what he’ll bring to the Pelicans in his first NBA game.

Previous Magic and Heat Pick Up Wins
Next Kentucky, Auburn both upset in wild day for SEC