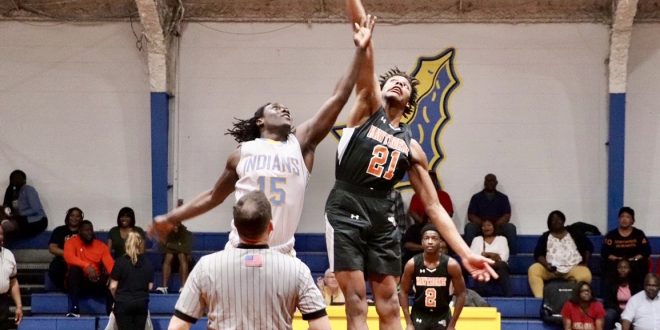 The Chiefland Indians hoped to redeem themselves after suffering a loss against the Hawthorne Hornets earlier this season but fell 66-34. The loss put Chiefland at 2-12 and advanced Hawthorne to 16-1 with a 15 game win streak.

At the beginning of the game, it looked like both teams were playing at the same level. Chiefland was on the board first after a free throw attempt by Quay Brodus, which gave the Indians their only lead of the night. Brodus also put up a field goal and Isaiah Woods hit a 3-pointer. At the end of the first quarter, the Indians trailed Hawthorne by just 2 points with an 8-6 score.

By the end of the half, the Indians trailed 24-15. Hawthorne was able to work its way around the defense, but head coach Adam Boyd thought the offense was what the team needed to improve the most in the second half.

“[We need to] not turn the ball over. [And] it would help if we knocked down a couple open shots, you know we’re struggling from three. From two we’re okay, I think we’re 5-9 from two but 1-7 from three.”

Head coach Adam Boyd sharing knowledge with the team on a timeout. pic.twitter.com/NEH8UKHO9t

Falling Short in the End

In the end, the Indians could not keep up with Hawthorne’s offense. However, despite the end result, this game saw great performances from some of Chiefland’s players.

Brodus led the Indians in scoring, accounting for 21 of the Indians’ 34 points and two three-pointers in the second half. Austin Adams also hit a three, and Jamie Strong, Austin Berry and Sedrik Moultrie all got on the scoreboard.

Quay Brodus with ANOTHER three for the Indians. @ESPNGainesville pic.twitter.com/VgNjvUJASg

There are still plenty of games to be played for Chiefland this season. They will continue their season tonight at 8 p.m. against rival school Trenton High School. With 12 games left before the start of Districts, the Chiefland Indians still have plenty of time to focus on their weak points and become a competitor in the postseason.