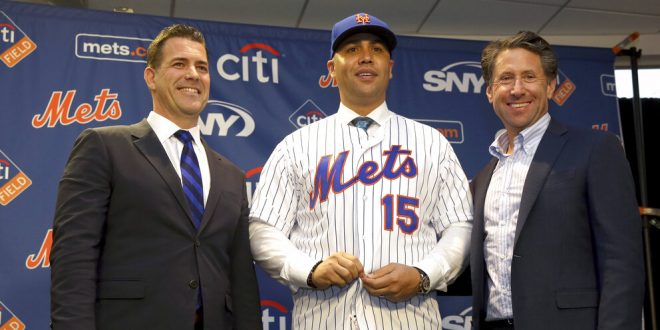 Carlos Beltran stepped down from his position as Mets manager Thursday afternoon. His departure is the latest domino to fall as a result of the Astros’ sign-stealing scandal.

As a fan favorite as a player, Beltran accepted the position on November 1st and is out before managing a game.

The forty-two-year-old Puerto Rican began his playing career in 1998 and played perhaps his best seasons for New York.

Beltran played for the Mets from 2005 to 2011, a stretch in which he was named an all-star four times.

Beltran’s time as a Met perhaps foreshadowed a future in coaching, as he was a revered locker-room leader and strategist.

Beltran shined statistically in the postseason for New York, but never reached a World Series with the team.

Beltran was appointed manager of his former team on November 1st.

He replaced Mickey Callaway – who failed to reach the postseason in his two seasons with the club. The reaction was overwhelmingly positive amongst a long-suffering Mets’ fanbase.

The premature end to Beltran’s tenure comes as a result of his implication in the Houston Astros’ cheating scandal.

Beltran played just one season for Houston – but contributed to the team as a designated hitter during their 2017 World Series run.

The MLB league office released a report on Monday detailing the sign-stealing that the Astros employed during the 2017 run.

The report accuses Houston of using an outfield camera to relay the opposing catcher’s signals to the dugout and batter.

This goes down as one of the ugliest scandals in baseball history, and the #Mets have certainly been wounded by the shrapnel. I think Carlos Beltran would have made a good manager, but now there’s an enormous task of replacing him less than 4 weeks from the start of camp.

Beltran is the third manager to be fired as a result of the scandal, joining Astros’ AJ Hinch, and Alex Cora of the Red Sox.

While Hinch and Cora were on staff for that 2017 title team, Beltran was the only Astros’ player to be mentioned in the MLB’s report.

Carlos Beltrán was named in the MLB report one time.

This sentence effectively cost him his job, and you have to believe the league knew that when they made him the only player identified here. pic.twitter.com/4FPcjP3CJO

According to Mets COO Jeff Wilpon, the decision to part ways with Beltran was mutual. Beltran recognized that his alleged involvement in the scandal would be an unnecessary distraction for the organization.

The Mets have made it official, saying that they "mutually agreed to part ways" with Carlos Beltran.

Beltran: “I’m grateful to them for giving me the opportunity, but we agreed this decision is in the best interest of the team. I couldn’t let myself be a distraction."

The Mets claim they had no knowledge of Beltran’s involvement in the scandal when they hired him.