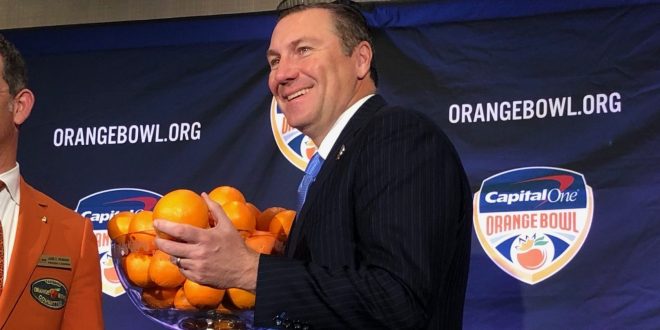 With National Signing Day around the corner, Florida is ramping up its official recruiting visits. They host a gaggle of prospects this weekend.

According to 247 Sports reporter Blake Alderman, Florida has approximately three spots to fill with some remaining need to be addressed. Also, 247 has the Gators ranked eighth in the 2020 class standings nationally.

Shorter’s availability depends on him receiving a waiver. Without one, he’ll sit out the 2020 season and could enroll in summer. Helms is actually a Gator signee who had yet to take his official visit.

Gators Zero In on Gibbs

The Gators want to fill one of its three open spots with a running back. According to Aldmeran, Gibbs is Florida’s biggest target at that position. Alderman said he’s been at the top of Florida’s board for quite some time.

“Florida offered him September and has really been pushing him hard,” Alderman said.

However, he’s currently committed to Georgia Tech and has several appeals to Gibbs including proximity to home, running backs coach Tashard Choice and his guardians’ son signed as a preferred walk-on at Georgia Tech.

Additionally, Florida does have a second running back visiting in Colorado commit Ashaah Clayton out of New Orleans. Either way, Florida will need to flip a prospect.

Florida is trying to reel in two in-state products in Avantae Williams and Marc Britt. Britt didn’t sign in December and has mentioned visits to schools like Ole Miss and Miami.

Williams’s decision is between Florida and Georgia. A big thing for Williams is his two children and proximity is a must for him. Williams feels Athens isn’t too far away, but for Alderman sometimes these farther schools appear more so in the 11th hour.

Furthermore, Florida is competing for two other recruits outside of the state. Princely Umanmielen de-committed from Texas in October but still has the Longhorns and Baylor on his radar. Also, he could end up with visits to Alabama and Auburn.

Florida’s lone Saturday visitor is athlete Damarcus Beckwith. The Gators are his leader and have been since October. They’re in a battle with Tennessee and he’s looking to be a two-sport athlete at whichever school he chooses.

In conclusion, Florida holds just three more spots for 2020. A lot is still up in the air with National Signing Day looming. Can Florida close out strong?