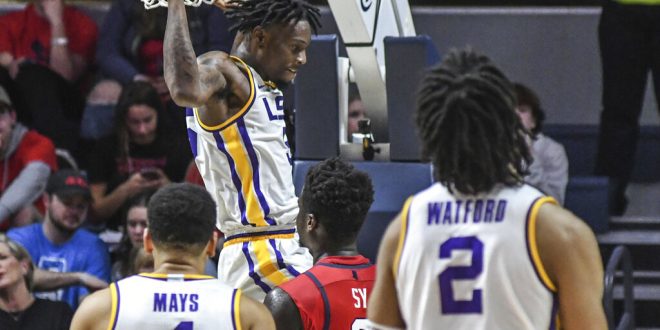 Should the Texas Men’s basketball team be worried about hosting LSU in the Big 12/SEC Challenge on Saturday?

The LSU Tigers are red hot coming off an 84-82 win over the Gators for their seventh straight victory. The Tigers are currently 14-4 overall on the season and 6-0 in SEC play, being the only undefeated SEC team left

LSU dominates teams in the paint with a starting lineup full of size. At the point guard position, Skylar Mays has appeared unstoppable offensively averaging 16.1 points, 4.7 rebounds, and 3.3 assists. On defense, Mays is a strong on-ball defender averaging 2.1 steals per game. Javonte Smart, the Tigers’ other guard, is averaging 11.8 points and 4.7 assists.

Around the basket for the Tigers, Trendon Watford and Emmitt Williams are a physical forward duo with both averaging double-digit points and 6 rebounds per game. Watford and Williams will continue to crash the boards and post up in the short corner all game. Last game against the Gators, LSU scored over 40 points in the point. Expect the Tigers to attempt to do the same against the Longhorns.

After a strong start to the season, the Texas Longhorns have struggled recently as they’ve dropped two straight games. Texas sits at 7th in the Big 12 currently with a 12-6 record overall.

The junior forward Jericho Sims is the main big man for Texas. He’s averaging 9.3 points per game and 7.8 rebounds. At 6’9 240 pounds, Sims fights hard in the paint for the Longhorns affecting opponents shots, averaging 1.6 blocks per game.

The Longhorns will need to shoot the ball well and fight hard down low in order to beat the ferocious duo of Wafford and Williams.

Tune in for tipoff at 2 p.m. at Frank Erwin Center in Austin, Texas.