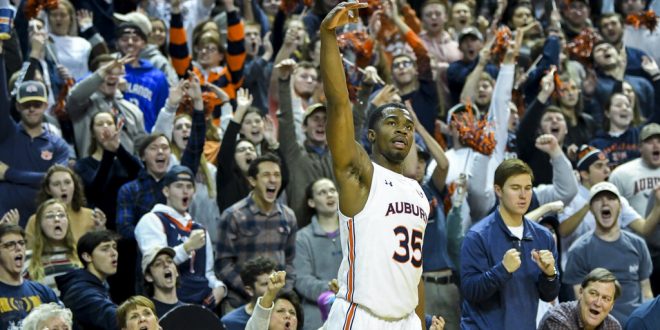 Auburn guard Devan Cambridge (35) celebrates a 3-point basket against South Carolina during the second half of an NCAA college basketball game Wednesday, Jan. 22, 2020, in Auburn, Ala. (AP Photo/Julie Bennett)

The Tigers started the season 16-0 and rose to #4 in the AP poll before suffering consecutive blowout losses at Alabama and Florida.

Bruce Pearl’s teams at Auburn have been known for high-flying offense, and Pearl noted that getting the offense back on track was key Wednesday night:

Additionally, Auburn was propelled by a breakout performance from freshman guard Devan Cambridge. Cambridge averages just 4.2 points on the season but dropped 26 points on 10-14 shooting against the Gamecocks.

Bruce Pearl had some praise for the freshman and his timely breakout:

Auburn finds itself in a four-way tie for third place in the SEC and looks to repeat last year’s Final Four run.

The Cyclones, led by fifth-year head coach Steve Prohm, have struggled to find their footing this season.

They’ve been a picture of inconsistency thus far – beating a ranked Seton Hall team in non-conference play but losing to 5-12 Florida A&M of the MEAC.

Despite a generally disappointing start to the 2019-2020 season, there are still reasons for Cyclone fans to be optimistic.

The Cyclones enter Saturday’s game coming off of a Tuesday victory against Oklahoma State and have a chance to flip the script of their season. In the next two weeks, the Cyclones will face #1 Baylor and #14 West Virginia – a stretch featuring three ranked opponents in four games.

In order to gain a momentum-building victory at Auburn, they’ll need a monster performance from their do-it-all star Tyrese Haliburton.

The sophomore point guard is a projected first-round pick and was recently named the #21 player in the nation by ESPN. He leads Iowa State in points, assists, steals, and even rebounds.

On matching up with Haliburton and the Cyclones, Bruce Pearl had some complimentary words: