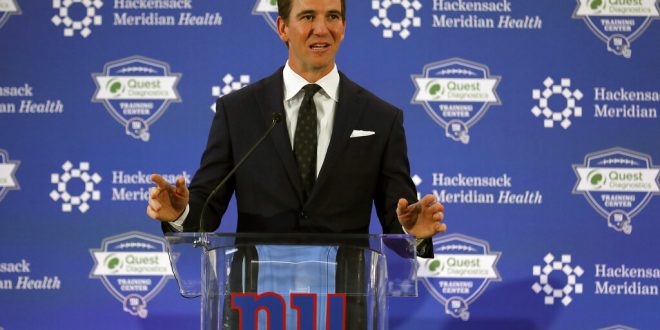 ELI Manning’s legacy: 2 Super Bowl Titles, 16 seasons, every passing record for the @Giants and how about this – 236 regular season games played including at one point, 210 consecutive games! Class and elegance personified! Eli will formally retire on Friday! #Giants

Rumors of retirement formed once his contract ended, however, the team confirmed the rumors on Wednesday.

The 39-year-old played 16 seasons with the Giants franchise and made quite an impact on the program. He hit all-time records for the team for passing yards (57,023), passing touchdowns (366) and completed passes (4,895).

Manning appeared on the field in a total of 236 regular season matchups and 248 total Giant games, which is another record for the team. He ended his career ranked sixth in the NFL for passing attempts and seventh in passing yards.

Manning was the number one pick back in the 2004 NFL Draft. The New York Giants secured his spot on the team after a trade with the San Diego Chargers.

Manning’s brother, Peyton, retired in 2016 after 18 seasons and was inducted in the Pro Football Hall of Fame.

“Eli is our only two-time Super Bowl MVP and one of the very best players in our franchise’s history. He represented our franchise as a consummate professional with dignity and accountability. It meant something to Eli to be the Giants quarterback, and it meant even more to us. We are beyond grateful for his contributions to our organization and look forward to celebrating his induction into the Giants Ring of Honor in the near future.”

Manning said that playing his entire NFL career with one team is something special.

Manning said he had the time of his life saying his goodbyes.