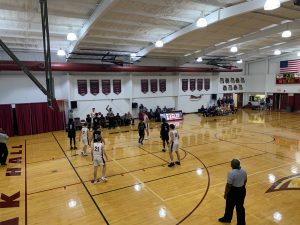 Shots were not easy to come by but the Oak Hall boy’s basketball team prevails in a 39-36 win over Interlachen on Thursday night.  Neither team was able to eclipse 40 points. Junior guard Cole Gonzales led the Oak Hall Eagles with nine points, while Interlachen freshman guard Chavarius Dumas led all scorers with 15 points.

“If you want a definition of winning ugly, this was it,” said Oak Hall assistant coach David Stirt following the Eagles’ thrilling victory over the Interlachen Rams (3-14). It’s hard to disagree with Coach Stirt, after the Eagles (12-5), went on multiple scoring droughts and had their worst offensive showing of the season.

Oak Hall got off to a fast start, leading Interlachen 13-3, halfway through the first quarter. The Eagles were dominant in the paint and in transition, scoring 10 of their first 13 points inside and six points on fast breaks, early on.

However, the Rams responded. After trailing 15-6 at the end of the game’s first frame and through much of the second quarter, Interlachen finally found its footing. It began with a quick 7-0 scoring run in just two minutes. Freshman guard Chavarius Dumas, the Rams’ leading scorer this season, scored five consecutive points and continued to go on a tear the rest of the way. Interlachen finished the half on a 13-1 run and led at the break 18-16. Oak Hall scored just one point the entire quarter, failing to convert a single field goal.

For Interlachen, the run didn’t stop there. The Rams continued to pour it on to start the third, picking up right where they had left off. Freshmen Reggie Allen and Jaden Perry combined for eight points early in the second half of action. Interlachen held their largest lead at 26-18, going on a dominant 23-3 scoring run dating back to the first quarter.

Much of the middle of the third quarter was sluggish as neither team could get anything to fall, resulting in a three minute scoring drought. Finally, Oak Hall found success inside the paint, ending the drought and the third quarter on a 7-0 run. The third frame ended with the Rams on top 28-25, setting up what would be an exciting and competitive end to the game.

The fourth quarter saw the most points scored, as the teams combined for 22 points. The Eagles started the final frame strong, obtaining their first lead (30-29) since early in the second quarter, continuing a 12-3 run. The two teams exchanged buckets and turnovers for much of the final four minutes.

With 17 seconds left, Oak Hall senior forward Collin Ponton hit a go ahead free throw to give the Eagles a 37-36 lead. Following a jump ball on a rebound, the possession arrow gave Oak Hall the ball with the lead. With just 15 seconds left, junior guard Matthew Mckinney hit both of his shots from the charity stripe to put Oak Hall up three.

Interlachen senior guard Thomas Mack’s potential game-tying three fell short as the buzzer sounded, giving the Eagles a three point victory. Oak Hall completed the third quarter comeback and got their 12th win of the season, while the Interlachen Rams fell to 3-14.

Will Levenson is a Journalism and Sports Media major at UF. He produces daily shows for WRUF, including "Sport Scene with Steve Russell," "Harp on Sports," and "The Tailgate." In addition, Will provides weekly sports updates for WUFT News and radio Sportscenters for WRUF radio. Will has been a writer at ESPN Gainesville since September 2019.
@BigWillLevenson
Previous Auburn Prepares to Host Iowa State in Big 12/SEC Challenge
Next Kentucky and Texas Tech Prepare for Big Non-Conference Game