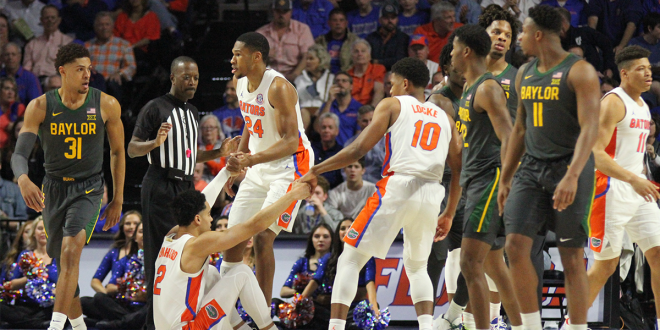 The Florida men’s basketball team falls at home Saturday to the number one ranked Baylor Bears in a prime time match up, losing 72-61 to fall to 12-7 on the season.

Florida came in to the game favored but was unable to get it done in front of the home crowd. The Gators came out hot jumping out to a 17-9 lead before the second media break.

Keyontae Johnson led the way for the Gators scoring the team’s first seven points. He finished with a game high 20 points to go along with five rebounds.

Kerry Blackshear Jr. hit a jumper with 9:26 left but Baylor would go on a 20-6 run to close the first half and take a 40-29 lead. MaCio Teague was the leading scorer for the Bears putting up 16 points, six rebounds and three assists.

The Gators never regained the lead but did show some resiliency. Florida was down 18 at one point in the second half but cut it down to 10 with just under three minutes left in the game.

Florida made its run in the second half but the number one team in the country showcased their skills. Baylor shot 47.4% from the three-point line, shot 15-16 from the free throw line and out rebounded the Gators by 11. In addition, the Bears played stout defense blocking six shots and recording five steals.

This is the first time the Gators have dropped consecutive games this season. Coach Mike White and the Florida Gators will need to finish SEC play strong in order to secure a spot in the NCAA Tournament. Florida holds a 4-2 conference record and hosts the Mississippi State Bulldogs Tuesday night.

The conferences split the day with five wins and losses apiece in the Big 12/SEC Challenge. This game was an outlier as many of the others were nail-bitting finishes. No. 15 Kentucky beat No. 18 Texas Tech in by two in overtime, No. 16 Auburn beat Iowa State by four, LSU took down Texas by just two, Oklahoma beat Mississippi State by a point and Alabama beat Kansas State by three.

After another wild day of college basketball, and on those days at times the top team in the land goes down; not on this day.  The Gators seemed to be moving in the right direction after beating the then fourth ranked Auburn Tigers last weekend but offensive struggles returned, especially from the three point line and the foul line.