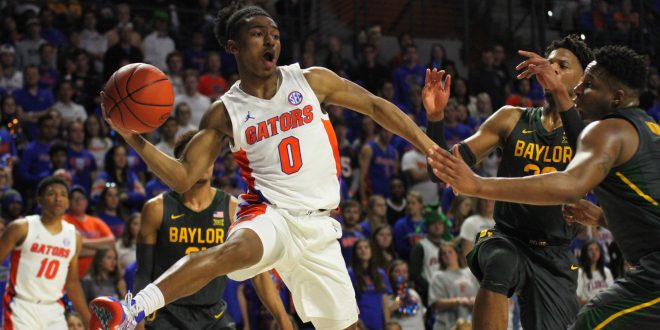 Florida's Ques Glover (0) searches for a shooter on the perimeter after driving the ball inside. Against Baylor on Jan. 25, Glover recorded 15 minutes off the bench.

The Gators men’s basketball team looks to bounce back in a big way against Mississippi State Tuesday night.

Florida missed an opportunity to pick up an important win against top-ranked Baylor on Saturday, Jan. 26. The loss dropped Mike White’s squad to a 12-7 record, and 2-2 against ranked opponents this season.

The Gators under Coach White are 3-1 against Mississippi State but lost their last meeting in Starkville. Florida has not lost to the Bulldogs at home since 2008.

Mississippi State lost to Oklahoma on Jan. 25 by one point. The Bulldogs have won three of their last five including three SEC wins. Their last two losses have come by a total of two points.

Florida’s Noah Locke has been a key reason why the Gators are averaging 80.3 points per game in the SEC, good for second in the conference. Against Baylor, Locke broke his streak of 15 consecutive games with multiple three-point makes. Regardless, Coach White likes what he’s seen from Locke of late.

Mississippi State has a Kerry Blackshear Jr.-like player in Reggie Perry, who averages 16.4 points and 10.1 rebounds per game. A 2018-2019 SEC All-Freshman, Perry has nearly scored as many points this season as he had all of last season and has almost doubled his scoring average from 2018.

According to Coach White, Perry is an absolute beast.

According to Coach White, Mississippi is a better offensive rebounding team than Baylor was. Florida’s Keyontae Johnson says that his team needs to improve on the boards.

Many people have chalked up Florida’s all-around issues this season to being a young team. Coach White does not buy into any of that.