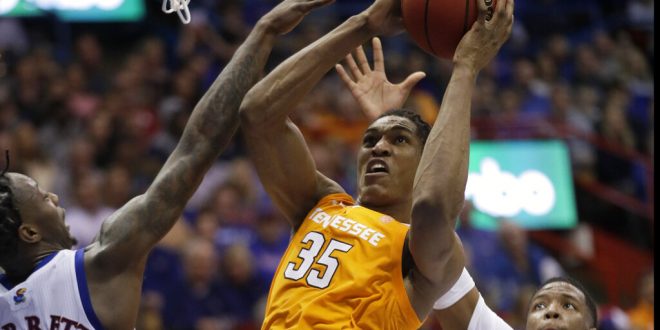 The Tennessee Volunteers will host the Texas A&M Aggies this evening at 6:30. Both teams come off of a loss from their respective games on Saturday. Recently, the two teams have been slogging through the SEC, surely making this contest an interesting one to follow.

Volunteers search for a home win

Both of these teams have the potential to breakout. The No.3 Kansas Jayhawks got a run for their money on Saturday when the Vols faced them. The Tennessee offense struggled to maintain discipline while in possession of the ball. Over the course of the game, the Volunteers racked up 15 turnovers. Despite this, they closed the gap with Kansas, coming within just six points before finishing 74-68.

Some key players from Saturday’s game include forward John Fulkerson and guard Yves Pons. Fulky pulled off a double-double that game, finishing with 15 points and 12 rebounds. Pons also made a statement, accounting for a third of the team’s total points at 24.

Overall, the Vols are a tight-knit team that can effectively defend against a Top 10 attack, as shown against Kansas. If Tennessee can manage inside the arc and force the Aggies to shoot from the three, they are in a good position to raise their record to 13-7.

Similarly to Tennessee, Texas A&M has struggled somewhat in gaining a foothold in the SEC. At 3-3 in the conference right now and 9-9 overall, the Aggies have been trying to find their strengths while minimizing their weaknesses.

Aggie forward Emanuel Miller was their key contributor in their game against Oklahoma State on Saturday, putting up 11 points overall. Alongside him was guard Savion Flagg, who grabbed seven rebounds, five assists, and two turnovers. Unfortunately for Texas A&M, a poor defense proved to be a killer against the Cowboys who finished the game with a 63.3% field goal percentage.

Tonight these two teams will be a force to be reckoned on the court. Tennessee has the ability to put immense pressure on Aggie defense. Texas A&M can cover the spread effectively though, so long as they bounce back from their defensive shortcomings from their game against the Cowboys. Tennessee hosts the Aggies tonight in an explosive SEC matchup tonight at 6:30 p.m.