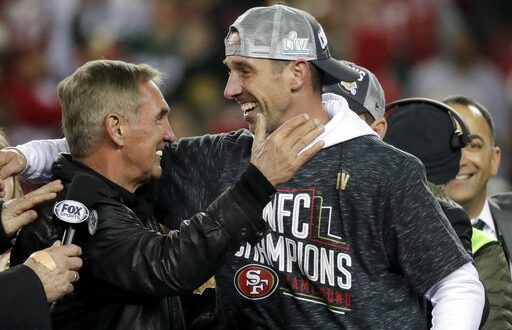 Kyle Shanahan, head coach of the San Francisco 49ers, is getting a second chance. A second chance at Super Bowl glory.

The San Francisco 49ers are one of the most prestigious teams in the National Football League. They have five Super Bowl Championships and have only lost the big game twice.

Shanahan, however, has the dark cloud of the biggest come back in Super Bowl history hanging over his head. And that cloud reads out the scoreline of 28-3.

Will Kyle Shanahan blow a 28-3 lead again like he did in Super Bowl 51?

Shanahan was the offensive coordinator for the Atlanta Falcons in 2017.

That Falcons, team led by his explosive offense, was able to outperform the New England Patriots, for a half. The Falcons let off of the gas offensively and gave up a 28-3 lead and lost Super Bowl 51 in overtime.

Shanahan swears that this team is much different from that team just a few years ago.

If you were to google “teams that wouldn’t blow a 28-3 lead” the first one to pop-up would be the San Francisco 49ers.

Here is there season and playoff run by the numbers.

Needless to say, the 49ers have used a very old school run first, hard-hitting philosophy to get them to Miami for Super Bowl 54.

Across the gridiron, Shanahan’s opponent on Sunday, Andy Reid, has also never hoisted the Lombardi Trophy.

Andy Reid has been to the Super Bowl once as a Head Coach. He went with Philadelphia in 2005 and also lost to the Patriots, just like Shanahan. He still has immense respect for the Chiefs head man who has been in the league for over 20 years.

Mike is most famous for his two Super Bowl wins with the John Elway led Broncos in the late 90s.

Mike also has San Francisco ties. He won the Super Bowl 29 as the 49ers offensive coordinator.

That Super Bowl was also played in Miami.

On Sunday, we will see if Kyle Shanahan’s second chance will wash away the memory of 2017 and if he can join his father as a Super Bowl-winning head coach. 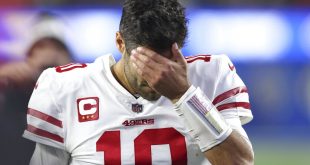