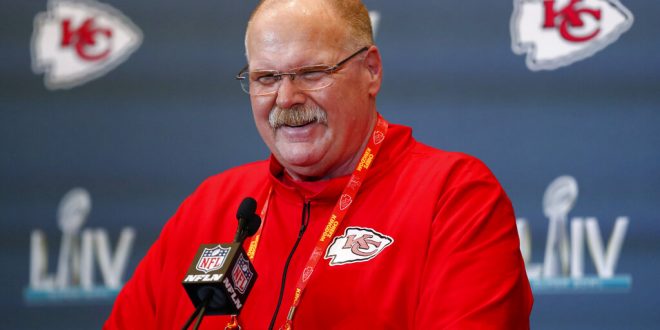 Kansas City coach Andy Reid has the opportunity to earn his first championship as head coach when the Chiefs meet the 49’ers in Super Bowl 54 on February 2.

This will be Reid’s second appearance in the Super Bowl as a head coach. He led the Philadelphia Eagles to the Super Bowl XXXIX following the 2004 season, which resulted in the Eagles falling to the Patriots by a mere field goal. Reid says this Super Bowl is not much different than his last.

“That was a long time ago. The base fundamentals are the same. I’ve probably rearranged the schedule just a little bit and how we do things but it’s similar,” he said.

As he wraps up his seventh season as the at helm in Kansas City, Reid ranks sixth in all-time wins with 221.  He was hired in 2007 as the 13th head coach in Chiefs franchise history. Reid is the only coach in NFL history with at least 200 wins who does not have a championship title under his belt.

Meanwhile, This will be the first Super Bowl appearance for Chiefs’ defensive tackle Chris Jones. He wants to win it for coach Reid.

“Everything he’s put into this game. The commitment he’s shown to this game year in and year out. Just getting to a certain point, then something crazy happening, something logistic happening. It’s finally good to be here, and we just gotta finish the deal for him,” said Jones.

Battle of the coaches

And across the field, San Francisco head coach Kyle Shanahan has also yet to win a championship. He will be making his first appearance in the Super Bowl as head coach this weekend. Although, he was the offensive coordinator for the Atlanta Falcons in Super Bowl 51. Come Sunday, one coach will walk away with their first title as head coach.