The Saints begin spring 2020 with doubleheaders on Friday and Saturday in the JUCO Kickoff Classic in Clearwater.

The Saints roster this spring includes just five returning sophomores and eleven freshmen. This means that there will be a steep learning curve this season, but head coach Lindsay Fico is confident in her young group.

Part of this confidence is because of the experience that most of her freshman girls gained in fall ball. The Saints got to break in their youngsters with a schedule that included a game against the Florida Gators.

In addition to this talented group of freshmen, Fico feels that her sophomores will be key due to their leadership and play.

Returnees Karina Ortiz-Munoz and Dontaysha Gobourne stand out to Fico as sophomores who will need to carry the load for the Saints.

The Saints finished last spring’s season with a losing record, at 23-28.

Coach Fico thinks this spring can yield much better results if they improve upon a few problem areas on the defensive end.

Fico points to pitching as an area that sunk her squad last spring. The high number of walks they gave up was particularly troublesome for the Saints.

One freshman who has already shown her ability to shore up the pitching staff is Cris’Deona Beasley, out of Columbia High School. Fico spoke highly of Beasley’s abilities:

Another area in which Fico anticipates improvement from last season is athleticism.

Fico praised the incoming group of freshmen as one with loads of raw talent. She sees this year’s team as one where many players can play multiple positions.

The Saints begin their season in Clearwater on Friday against Fayetteville Technical Community College.

Later in the year, Fico sees a series of matchups against the College of Central Florida as a huge opportunity to prove themselves.

Seminole and Saint John’s River are additional opponents who stand out for Fico.

Santa Fe’s home opener is on Feb. 4 against Tallahassee College. 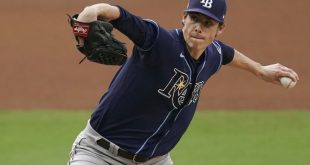 It’s fun seeing someone pitch for their childhood team. It’s even more fun when there’s …