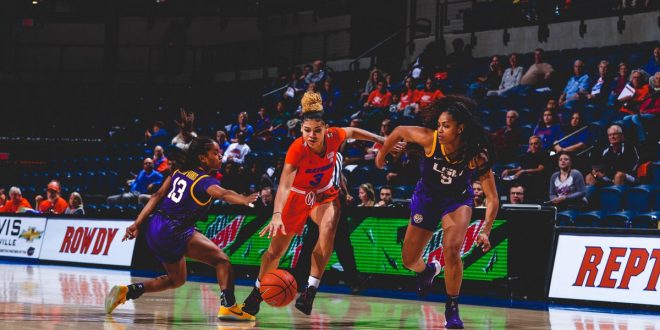 After two weeks away from home in the O’Connell Center, the Florida women’s basketball team returned Thursday to face LSU.  Coming off a four-game stretch facing off against top ranked opponents, the Gators tried to sustain a win at home but fell short against the Tigers, losing 77-68 Thursday night.

The Gators started the game well, keeping up with the Tigers as they ended the first quarter leading 17-16.  There were 15 lead changes and six ties throughout the game.

Florida had four players in double-figures in scoring but was not enough to hold off LSU. Gator freshman Lavender Briggs had 16 points and six rebounds in the game, making this her 18th double-figure game this season. Briggs is averaging 13.8 points per game and leads the team in scoring.

Following behind her for the night was junior Kiki Smith (14 points), Nina Rickards (11), and  Zada Williams (11).

The LSU Tigers came into this game 14-5 overall and 4-3 in SEC play.  They also had four players in double figures in this match up. The standout player for them in this game was junior Khayla Pointer who finished with a game high 24 points. She is one of the leading scorers for the Tigers averaging 14.5 points per game for the season.

Alongside her double-digit scoring game the Tigers had Jailin Cherry (10), Jaelyn Richard-Harris (14), and Awa Trasi (10) hit the double digit mark.  A key to the LSU win was how well they shot from beyond the arc as they hit 8 of 10 three point shots in the contest.

Gator Women’s basketball hits the road to face off against number 13 Kentucky on Sunday. Florida played this Wildcat team at home earlier this season where they fell short 65- 45.