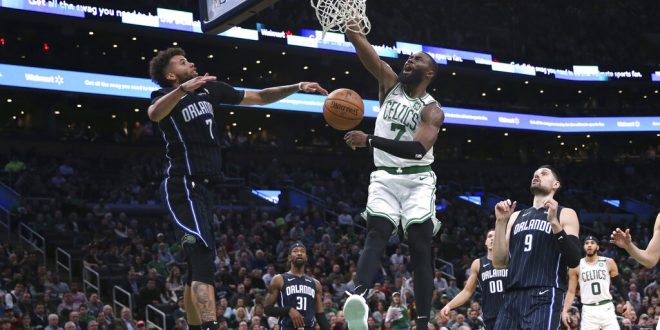 Despite the absence of Kemba Walker and Marcus Smart due to injury, the Boston Celtics found a way to win Wednesday night against the Orlando Magic.

Orlando kept the game close. After trailing by one at halftime, Nikola Vucevic nailed a triple to give the Magic a 68-67 lead midway through the third quarter.

Aaron Gordon tied the game at 72 with a layup after the Celtics regained the lead, but Boston slowly pulled away from there. Orlando cut the lead to five with just over five minutes left in the game, but the Celtics finished strong with a 116-100 win.

Jayson Tatum stepped up big for the Celtics on both sides of the ball. Tatum stuffed the stat sheet with 33 points, eight rebounds, five assists, three steals and two blocks.

He dominated from start to finish, scoring 16 of his 33 points in the second half. Tatum went on a run in the fourth quarter of 10 straight points that put Boston ahead by eight.

Immediately after, Tatum found Jaylen Brown on a fast break, and Brown threw down an emphatic one-handed slam to give the Celtics their first double-digit lead of the night.

Evan Fournier led Orlando with 26 points and knocked down six of eight tries from three. Gordon notched 23 points and 10 rebounds.

Gordon managed his third double-double in five games for the Magic. Fournier and Gordon played a key role in keeping the game close for Orlando.

Terrence Ross made an impact off the bench, totaling 18 points on a trio of threes and five of six from the charity stripe. Although Ross and Fournier shot the ball well from beyond the arc, they could not match the Celtics, who made more than half of their attempts from three-point land.

The loss to the Celtics sunk the Magic to 22-29 on the season and 1-6 in their last seven games. Orlando plays again tonight at Madison Square Garden against the New York Knicks.