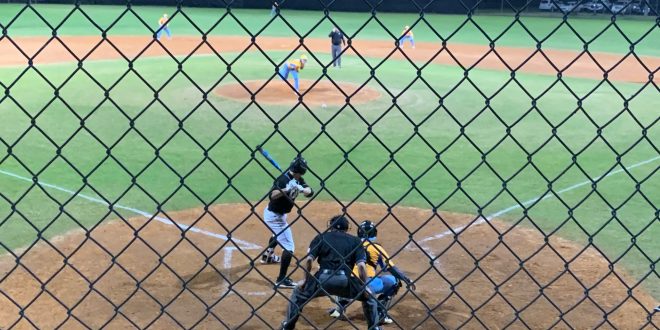 With pitchers and catchers reporting to MLB Spring Training this week, baseball is in the air all around Florida. That, and the start of the season for high school baseball, it’s safe to say baseball season is upon us. Coming off a 17-9 season, the Buchholz baseball team is looking to take the next step. Coach Ron Brooks returns six seniors, including three preseason All-Americans. It’s safe to say expectations are high for the Bobcats, with the Buchholz faithful anxiously waiting to see if they will live up to the hype.

Right out of the gates, Buchholz jumped out to a 2-0 lead after a left porch moon shot from junior catcher Dario Astudillo. The lefty finished the night 1 for-2 with a walk.

Defensively, Buchholz was lights out. Junior pitcher Jackson Peters pitched four scoreless innings, giving up only four hits on the night. While Peters had a gem of a night, his defense did him favors. Junior shortstop Brett Blair was making gold glove plays all night. And behind the plate, Dario Astudillo made his best JT Realmuto impression by stopping Chiefland runners looking to steal.

No Run’s, No Problem

While steals and walks aided the Bobcats victory, Chiefland’s sloppy play helped out as well. Chiefland finished the game with five errors, some of which resulted in runs for Buchholz. At one point, it seemed like there was an error every other play. Until Brett Blair stepped into the box and launched a three-run homer to center field.

Then, up 9-0 in the bottom of the fifth, the game ended in the most fitting way possible. After a ball got hit into shallow right field, another error occurred. Yet another Bobcat found home plate, and the 10-0 mercy rule came into play, giving Buchholz their first win of the season.

What’s Next For Buchholz

On a night where there were only two hits, Buchholz found a way to score 10 runs. There’s a lot to be excited about at Buchholz, as Corbin Grantham and Austin Akey will not be going hitless every night. This is a team to watch moving forward, as they possess sure firepower that’ll be flexed as the season goes on.

Buccholz will next travel to play at Williston on Thursday.  Bobcat ace and Ole Miss commit Luke Baker is likely to make his season debut this Thursday. WRUF will be on sight covering this match up.

High school football playoffs are just starting to heat up. And a few local teams …