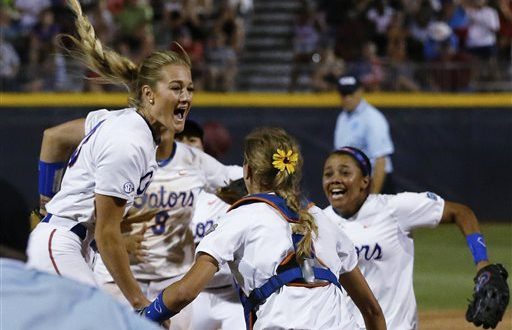 Team USA took a 5-3 victory over the Gators in the USA Softball Stand Beside Her Tour.

The Gators welcomed back two-time national champions Aubree Munro and Kelsey Stewart.  And, 2012 SEC Player of the Year and First Team All-American Michelle Moultrie took the field for Team USA.

Moultrie played with the Gators from 2009 to 2012. During her time at Florida, Moultrie earned multiple accolades including 2011 Women’s College World Series Co-Most Outstanding Player.

Both Munro and Stewart were members of the Gators 2014 and 2015 national championship teams.  In 2015, Stewart earned SEC Player of the Year in addition to being named a First Team All-American.

Skylar Grey’s “Coming Home” played in Pressly Stadium as the three were greeted by fans.

After a scoreless first two innings, Team USA quickly took control in the top of the third. They capitalized on two consecutive walks from Florida pitcher Natalie Lugo.  With the bases loaded, left fielder Janie Reed put Team USA on the board with a two run single to center field.

First baseman Valerie Arioto loaded the bases again after being hit by a pitch. Team USA’s Hannah Flippen then singled up the middle for two RBIs furthering the Team USA lead to 4-0.

Flippen went two for four at the plate including two RBIs.  In the circle, Team USA pitcher Monica Abbott recorded 12 strikeouts through the first five innings.

In the top of the fifth, shortstop Ali Aguilar hit an RBI double to left center field furthering the Team USA lead 5-0.  Aguilar finished the night two for three at the plate with three RBIs.

In the bottom of the sixth, Florida’s Kendyl Lindaman hit a two run home run to put the Gators on the board.  Entering the top of the seventh, Team USA held onto a 5-2 lead.

Florida continued to rally in the bottom of the seventh with an RBI double from Bryn Thomas.  Up 5-3, Abbott headed back to the circle for Team USA but after loading the bases the Gators came just shy of producing a run.

Despite falling short of a victory, Stewart saw a fight in within the Gators.

Team USA will return to the field on Wednesday night against the Liberty Flames.

The Gators return to Pressly Stadium on Wednesday night for a midweek match-up against the UNF Ospreys.

Previous Too little, too late: UF falls to USA
Next Buchholz Baseball Opens Season With a Slam

With two outs in the bottom of the fifth inning, Florida softball player Kendyl Lindaman …