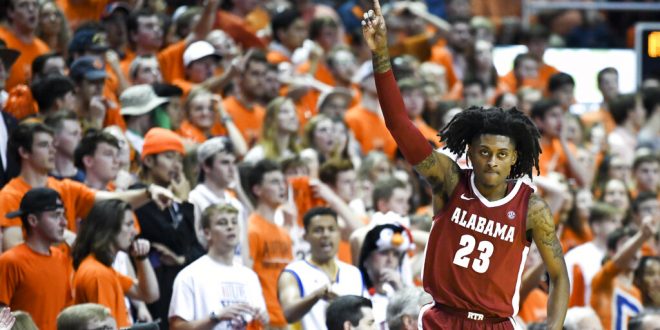 Alabama guard John Petty Jr. (23) celebrates the score that tied Auburn at the end of the second half of an NCAA college basketball game, Wednesday, Feb.12, 2020, in Auburn, Ala. (AP Photo/Julie Bennett)

Record-setting 3’s and a triple-double were not enough for the Crimson Tide as they fell to the Auburn Tigers in an SEC rivalry matchup. Auburn (22-2, 9-2) started out hot with a 16-0 lead within the first four minutes of the game. Alabama (13-11, 5-6) used the three-point shot to battle back taking it to overtime where the Tigers sealed the victory 95-91.

After having a career-high 37-point game previously against Georgia, Crimson Tide’s sophomore guard Kira Lewis Jr. made history. Lewis became the second Alabama player to record a triple-double. He recorded 10 points, 13 assists and 10 rebounds against the Tigers. He joins Roy Rogers who had two in 1996.

What set the Crimson Tide apart was the 3-point line. Alabama made history from beyond the arc with an SEC record in attempts (59) and makes (22). Nine of those 22 came from the first half to cut the deficit to three going into halftime, 44-41.

While Alabama was able to tie it early on in the second half, Auburn took an 11-point lead with 9:22 left to play. It did not last long as Alabama guard Jaden Schackelford gave the Crimson Tide life with 17 points including four three-pointers.

With missed opportunities at the line, the Tigers had a chance to put the Tide away in regulation. Senior forward Anfernee Mclemore missed two free-throw shots that would have sealed it for the Tigers with 23 seconds left. Crimson Tide’s John Petty Jr. grabbed the rebound and went down the court to pull up from three to tie the game at 81 with 14 seconds left.

JOHN PETTY WITH THE THREE TO TIE IT.

Auburn opened up overtime with eight straight points. Alabama responded with threes from Shackelford, Jaylen Forbes and John Petty Jr. to cut the deficit to two with 23 seconds remaining. Two free throws from J’Von Mcormick made it a two possession game and sealed the deal for the Tigers.

The Tigers were led by freshman Issac Okoro who dropped 19 before going down with an injury. Senior center Austin Wiley had 18 point and 17 rebounds.

Kira Lewis Jr. was not the only one to shine for the Crimson Tide. Jaden Shackelford tied his career-high of 28 points to go along with eight rebounds and junior John Petty Jr. finished with 20 points.

@@JohnSaliba14
Previous From Fenway to LA: Betts and Price talk blockbuster
Next Boone speaks out regarding Astros in ALCS