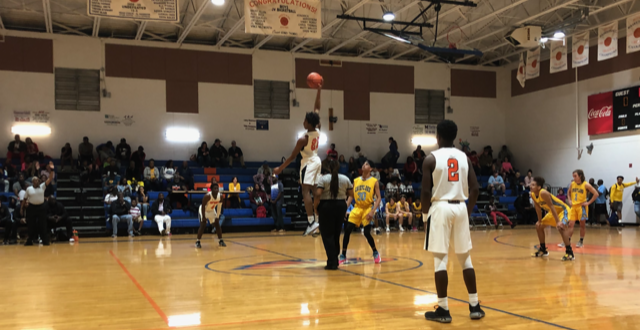 The third and final match-up between the Hawthorne Hornets and Chiefland Indians ended much like the first two did. After Hawthorne took the first two games 66-37 and 66-34, they again prevailed in the District semi-finals 68-35 on Friday.

Jumping ahead and never looking back

After Hawthorne scored just 13 points in the first half of their regular season finale, head coach Greg Bowie stressed fast starts all week. His team answered the call, outscoring Chiefland 31-7 in the first quarter.

Torey Buie nearly doubled up the Indians himself in the opening period, with 13 points. The Hornets dominated on both ends of the court, playing suffocating lock down defense, while shooting 11-16 (68.8 percent) from the floor offensively.

Even when the Hornets did miss shots, they made up for it by cleaning up on the glass.

“We actually knocked down free throws in the first half, which was huge,” Bowie said.

Free throw shooting has been a sore spot all year for Hawthorne. However, they knocked down eight of nine in the first quarter and 15-21 for the game.  It was a wire-to-wire win for Hawthorne. They led by 24 at the end of the first and increased their lead at the end of each successive quarter.  Jumping out to such a big early lead let the Hornets rest their starters for a big chunk of the game, giving their young players some needed playoff experience.

Thanks to the blowout nature of the game, all 14 Hornets saw action, with 10 of them entering the scoring department.

“The plan was to play a lot of guys and rotate so we can have fresh bodies for tomorrow night,” Bowie said.

Torey Buie once again led the way with 20 points, but all of that was done in the first and third quarters, as he rested otherwise.

Hawthorne Hornets #2 Key’shaun Williams (@KeyDoubleU) makes an assist to #10 Torey Buie (@ToreyBuie) for a layup in the third quarter to put the Hornets up by 26 against Chiefland Indians 48-22 @ESPNGainesville @ThePrepZone pic.twitter.com/qryf0syQtb

Fellow senior Key’shaun Williams was second on the team with 10 points.

The young players saw a lot of action, and they did not disappoint. Freshman Joshua Hayes and Jarrett Hughes each scored nine points to lead the bench mob.

“Josh Hayes, #23, he’s a freshman,” Bowie said when asked what impressed him. “He’s grown a lot during the year, as have a lot of those other bench guys that we wanted to give an opportunity to play.”

Looking ahead to the District Championship

Hawthorne improved to 20-3 with the win, and will face 15-8 Williston in the 1A District 7 Championship. Williston defeated Newberry 65-54 earlier in the night.  “I was very impressed with the way they played. They were down early and they clawed back in the game, and they’re just relentless,” Bowie said after taking in the Williston win.

“They play the full 32 minutes. So I’m kind of concerned with how hard they play, so we’re going to have to match their effort.”

It’ll be a quick turnaround for both teams. The championship is set for 5:00 p.m. on Saturday at Bronson.