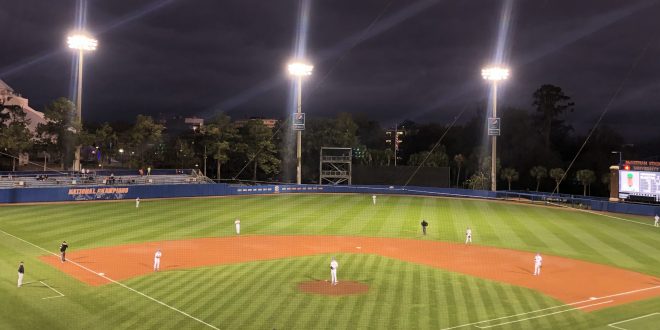 The Florida Gator baseball team opened their final season at Mckethan Stadium on Friday with a win against Marshall. In the 9-2 victory, Gator pitcher Tommy Mace recorded six strikeouts and got his first win of the 2020 season.

Starting off for the Gators:

The Gators struck first, scoring one run in the bottom of the first on a bloop single by right fielder Kendrick Calilao to score lead off hitter Judd Fabian. Mace recorded a clean frame in the second as he gets back-to-back strikeouts and a fly out to right field to end the top of the frame.

Mace said the game was filled with some first game jitters.

The Thundering Herd came rolling in at the top of the third. Second basemen Luke Edwards hit a hard ground ball off third baseman Kirby McMullen’s  glove to bring in shortstop Geordon Blanton from second to tie the game at 1-1.

McMullen got the Gators going in the bottom of the third with a stand-up double. Next up, second baseman Cory Acton drove in McMullen with a line-drive to right center for a hit, making the score 2-1 Florida.

Florida would keep it moving in the fourth, tacking on two more runs. Designated hitter Nathan Hickey led off the inning with a double. Catcher Cal Greenfield followed with a line drive all the way to the center field wall to score Hickey. Next, Fabian carried one to the right field wall to score Greenfield to bring the score to 4-1 after four innings.

Gators Show Power at the Plate

Errors from the Gators caused a run to score in the top of the fifth. A pick off throwing error on Mace caused the ball to roll into center field allowed Marshall shortstop Blanton to cross home to put the Herd within two runs. Mace came out unscathed following the error and allowed no other runs in the inning.

The top of the sixth started off with a diving catch from left-fielder Austin Langworthy with arguably the best defensive play of the night. Marshall was unable to chip away at the lead, leaving the score at 4-2.

Freshman shortstop Josh Rivera recorded his first career hit with none other than a solo home run to put UF up 5-2 in the sixth.

To start off the seventh, the Gators replaced Mace with right-handed pitcher Ben Specht. Specht recorded two strikeouts on the night and allowed no hits. The Gators added four more runs in the seventh inning with one coming off an error to allow McMullen to score. Following the error, sophomore first-basemen Kris Armstrong launched a three run home run to bring the score to 9-2.

Armstrong said in the off season he really just worked on simplifying things and that has made the difference so far.

Marshall was unable to rally in the eighth or ninth inning. The final score remained 9-2 as the Gators clinched their first win of the season. The Gators will face Marshall in the second game of the series Saturday afternoon at 4 p.m.