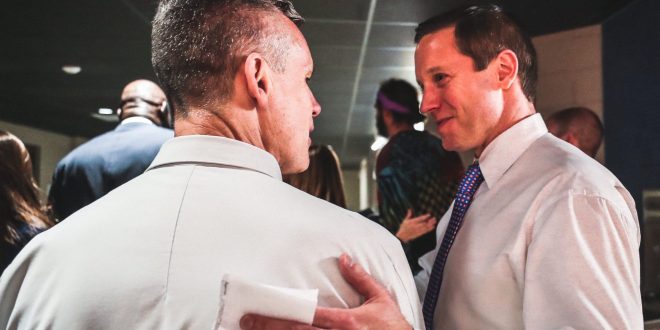 It was a night of honor for the Gator community as they paid homage to two-time national champion and former Gator head coach Billy Donavan. Surrounded by thousands of fans, colleagues, and past players of the program, all embraced him as the Gator Basketball court was named after him.

Coach Donovan was reunited with many of his former Gator players who came to town especially for the event.  Despite NBA All-Star Weekend going on, many former Gators that are now professional NBA players, returned to pay respects to their former college coach.  Players like Dorian Finney-Smith, Bradley Beal, Al Horford, Joakim Noah, and Chris Chiozza gathered to honor Donovan.  It was a special  moment for the Gator basketball program and for the Donovan family.   During his 19 year run at Florida, Donovan secured two national titles, six SEC championships, three consecutive SEC Tournament titles and many other NCAA Tournament appearances.

The current Gator men’s basketball team put on quite a show as well.  Florida held Vanderbilt to 19 points in the first half, the lowest point total in the first half of any game this season.  The win moves the Gators to 8-4 in the SEC with the dominating 84-66 win.

The Gators landed three players in double- figures for the night. Guard Noah Locke led the Gators to this win with 19 points as he continues to shoot the ball tremendously from beyong the arc as hit hit 6 of-8 shots from long distance.  Keyontae Johnson (11) and Kerry Blackshear (15) joined Locke scoring in double figures for the game.

Vanderbilt came into this game following a loss to Kentucky.  With the loss against Florida, they remain last in the SEC with a 1-11 record in the conference. Vanderbilt tried to get it done on the defensive side early limiting the Gators in scoring the first five minutes into the game but that was not enough to hold off this Gator team. After trailing by 29 points at halftime, Vanderbilt made it somewhat respectable late, but the game was never in doubt.  The Commodores were led by guard Saben Lee who scored 23 points, while Scottie Pippen Jr (12), and Maxwell Evans (10) also scored in double figures.

Vanderbilt coach Jerry Stackhouse was ejected as well late in the first half.

"This was my Gator killer suit. Obviously, it didn't work out that way" – Jerry Stackhouse after the game on his fresh suit https://t.co/1xrXwFLpOB

The Gators remain home to host Arkansas Razorbacks on Tuesday.