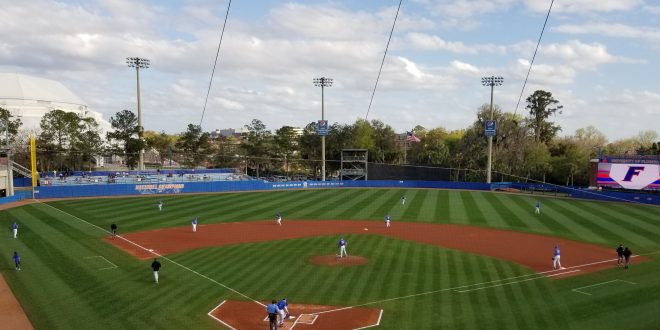 The Florida Gator baseball team moves to 2-0 on the season after beating the Marshall Thundering Herd 10-0 Saturday night.  Junior Jack Leftwich dominated on the mound while the Florida offense had a parade on the base paths. Gator coach Kevin O’Sullivan called it a “complete team effort.”

“Kokomo” by The Beach Boys might’ve been going through the head of Marshall’s Brady Choban going into the fourth inning because the man was cruising with a no-hitter until then. O’Sullivan even compared him to the type of pitchers you’d see in the SEC.

Then Kirby McMullen and Cory Acton got back-to-back walks and Kendrick Calilao doubled down the left field line to bring home the first runs of the game.

Catcher Cal Greenfield said the team noticed early on that Choban struggled when pitching out of the stretch. They knew they could rattle him if guys reached base.  Eventually Calilao would score on a wild pitch and the Gators took a 3-0 lead.

Florida piled it on after he exited with seven runs on six hits against the Herd’s four relief pitchers. The explosion was highlighted by Jud Fabian’s opposite field three-run homer that careened off the left side of the scoreboard.

Fabian was 0-for-3 with a walk heading into that at-bat. According to O’Sullivan, a great AB like that after starting 0-for-3 is indicative of his maturity level.

A big key to Florida getting so many guys on base was walks. The Gators worked 13 base-on-balls on Saturday.  Cory Acton had four those. Despite pitchers struggling on the mound Acton said he kept his usual up-the-middle approach.

“We took what were given at the plate today,” O’Sullivan said.

Leftwich and Co. Shut It Down

Leftwich was the absolute foil to Marshall’s staff. Junior catcher Cal Greenfield said everything was working for his roommate. For Leftwich, he was just anxious to get out there and pitch again.

After stranding two runners in the first he retired nine in a row before surrendering a two-out single. Leftwich ended his night allowing no runs on three hits with eight strikeouts in six innings of work.

The telling statistic between Florida’s pitching performance and Marshall’s? Walks. Leftwich gave up none and the staff combined for just one on the night.

The right-hander from Orlando said he’s more proud of no walks than eight strikeouts. He didn’t even realize it until later that he had no walks against him.  “I just don’t want to give up runs and I want us to win so at the end of the day that’s all that really matters,” he said.

Sophomore David Luethje combined with freshmen Hunter Barco and Brandon Sproat for a scoreless final three innings after Leftwich left the contest.  Leftwich and fellow starting pitcher Tommy Mace feed off each other’s performances. It’s a mindset they want to instill in the team. O’Sullivan would agree with that when it comes to closing things out.

O’Sullivan on finishing things off:

Florida goes for the sweep on Sunday at 1 p.m.