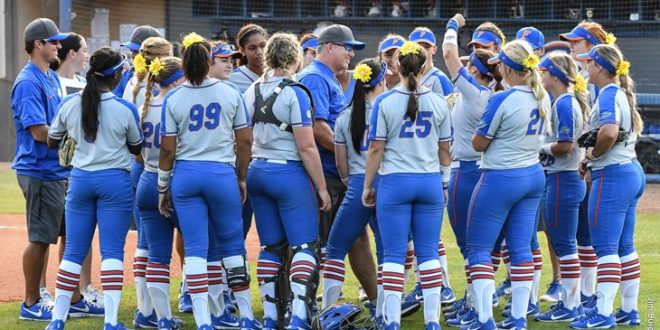 One walk off, one run-rule, two shutouts and a lot of sunflowers.

The No. 8/11-ranked Florida Gators’ softball team picked up their fifth consecutive victory and fourth consecutive shutout in day two of the Bubly Invitational in Katie Seashole Pressly Stadium on Saturday. Saturday’s games also marked the first Sunflower Saturday of the 2020 season for the Gators.

On Friday night, the Gators got the best of the Bison with a score of 5-0. That wasn’t the case on Saturday as Florida and NDSU found themselves in the midst of a pitching battle.

Junior Natalie Lugo went the distance in the circle and totaled 84 pitches in her seven-inning bout. A third of the Bison batters that faced Lugo walked back to the first-base dugout after being struck out. Lugo improves to 4-1 as a starter this season.

Meanwhile, Paige Vargas started in the circle for the Bison and held the Gators scoreless through six innings. However, only so much credit can be given to Vargas considering she tallied just one strikeout.

Instead, it was the Gators’ 21 pop-outs that hindered them offensively.

Heading into the bottom of the seventh, Florida and NDSU were still battling a stalemate.

Florida’s Jade Caraway, batting from the six spot, led off in the final half-inning. She slid a base hit past second base. Hannah Sipos pinch-hit for the Gators and put down a sac-bunt to advance Caraway to second.

Known for her clutch at-bats, Tim Walton called upon Jordan Matthews to put the game away. However, Vargas intentionally walked her to bring on Cheyenne Lindsey in the bottom of the order — just as Walton had envisioned.

However, it was Hannah Adams who found herself in prime position to put the game away in the bottom of the seventh.

Walton said earlier this season that if there were ever a time for it to be Hannah Adams’ time, “It’s your time, Hannah Adams.” And Saturday proved that.

Adams’ single scored Sophia Reynoso from second base to give the Gators a walk-off win against the Bison.

“I actually feel a lot more confident in myself this year,” Adams said after her game-winner. “I wouldn’t say there’s added pressure. I’m feeling more confident.”

After offensive struggles in game one, the Gators found success quickly in game two against the Longwood Lancers.

Freshman Julia Cottrill scored Hannah Adams in the bottom of the first inning with an RBI-single — her only hit on Saturday.

Following the 1-0 start, Jordan Roberts stepped to the plate after a hitless game one and smacked a two-run base hit to extend Florida’s lead to 3-0.

The Gator offense was silenced in their halves of the second and third innings. But Elizabeth Hightower, who started in the circle for the Gators against Longwood, was about to do some silencing of her own.

Through the five-inning contest, the sophomore righty struck out half of her at-bats en route to her complete-game one-hit shutout over the Lancers.

Later on, the Gators’ bats finally found some life. An eight-run half-inning was sparked by bases-loaded stroll to first base by Sophia Reynoso, scoring Julia Cottrill.

Further, Cheyenne Lindsey, Hannah Adams, Kendyl Lindaman and Charla Echols each batted in a run to take an 8-0 lead over Longwood.

Having not given up a run, the Gators are now streaking with four shutouts.

Ainslie is a journalism major at the University of Florida where she specializes in Sports Media. Her main passion is college football as it was a huge part of her childhood. Ainslie serves as a current correspondent for the Ocala Star-Banner, a newspaper for the Ocala, Florida area. She currently covers Marion County high school sports.
Previous Billy Donovan Memories Stretch All Across UF Athletic Department
Next Gators Men’s basketball Defeats Vanderbilt 84-66 as Former Gator Coach Billy Donovan Honored