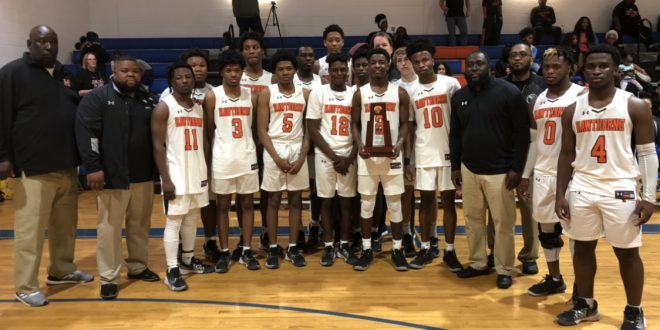 Jeremiah James (@thejerryjames1) passes out to Dre Lawrence (@AgentD_4) who hits his second three-pointer of the opening quarter to put Hawthorne up 11-9 on Williston in the 1A District 7 Championship. @ESPNGainesville @ThePrepZone @HawthorneHoops pic.twitter.com/OeQys48VDF

In the second quarter, Jeremiah James took it to coast-to-coast to make a difficult layup to put the Hornets up 22-20 against the Red Devils.

Jeremiah James (@thejerryjames1) takes it coast-to-coast and hits a difficult layup to put Hawthorne up 22-20 on Williston in the second quarter of the District 7 Championship.@ESPNGainesville @HawthorneHoops @ThePrepZone pic.twitter.com/9ITswYVk71

The Hornets ended the first half with a 7-1 run to cut the Red Devils’ lead to just one point, thanks in part to Jeremiah James (@thejerryjames1) who scored Hawthorne’s final six points, including two on this drive. @ESPNGainesville @ThePrepZone @HawthorneHoops pic.twitter.com/sziPh15ePw

Hawthorne pulls away in the end

Hawthorne Hornets #10 Torey Buie (@ToreyBuie) with a layup to take the lead against the Williston Red Devils 49-47 @ESPNGainesville @ThePrepZone pic.twitter.com/3gc7M4lTOU

“I figured we couldn’t play any worst than we already had been playing, so I knew at some point we gone have to make a run so as long as we had time on the clock, I still felt we had a chance to get the lead,” Bowie said on his confidence of his team being down most of the game.
Hawthorne went on to outscore Williston 24-11 in the fourth quarter to win 65-56 as they became the 2020 1A District 7 Champions. Torey Buie scored 13 points in the final quarter, going 5-of-5 shooting and ending the game as the leading scorer with 28 points.
Buie had a flashy no-look assist to Thurman Mills and a ferocious dunk to ice the game.

“We always wanna take care of our District, so it’s an ugly win, but at some places, district titles are hard to come, so we gone count it,” Bowie said.

Looking ahead to Regional Semifinals

“Tonight we took a step back we got to get back to work Monday hopefully we got all that out of our system,” Bowie said about his team going forward.

Hawthorne improved to 21-3 with the win and will face 12 – 7 Pahokee in the 1A Regional Semifinals. Pahokee lost to Wildwood 69-63 Saturday night.

“I know we gone have to play our best game Thursday, but we definitely not gone be able to play the way we played tonight and still get a victory Thursday,” Bowie said.

The Regional Semifinals game is set for 7:00 p.m. on Thursday, Feb. 20 at Hawthorne.