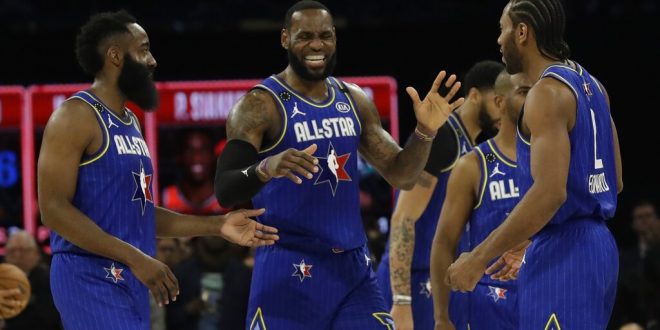 LeBron James of the Los Angeles Lakers celebrates with James Harden of the Houston Rockets and Kawhi Leonard of the Los Angeles Clippers during the second half of the NBA All-Star basketball game Sunday, Feb. 16, 2020, in Chicago. (AP Photo/Nam Huh)

The NBA All-Star Game on Sunday featured Team LeBron beating Team Giannis with a final score of 157-155. Perhaps the most interesting aspect of Sunday’s game was the inclusion of the Elam Ending format, with a few tweaks.

The Elam Ending stops the clock at the first play that ends under the four-minute mark on the board. Then, the officials will take the totals points of the current winning team and add eight points. This number is now the target score for both teams. The first team to reach that number before the buzzer wins. The benefit of the Elam Ending is that it eliminates intentional fouling, as it serves no incentive. A foul will only place the affected team on the free-throw line to further close the gap between their score and the winning target.

The NBA All-Star Game included the Elam Ending, with a few changes. The clock was shut-off for the entire fourth quarter instead of the last four minutes on the board. Then, the target score was decided by adding 24 points to the leading team, in honor of Kobe Bryant and the jersey number he wore. Without the presence of a ticking clock, the defense stays cleaner and the possession of the ball becomes vital.

Closing Out On A Free-Throw

The exciting fourth quarter was eventually brought to a close when Anthony Davis was fouled by Kyle Lowry, sending him to the free-throw line with the score at Team Lebron 156 and Team Giannis 155. The anticipation was at an all-time high when Davis missed his first shot but was able to achieve the game-winning shot with his second attempt. Davis earned $300,000 more dollars for Team Lebron’s dedicated charity. The Elam Ending seems to have created a guaranteed dramatic fourth quarter.

Team Lebron’s win earned $400,00 for the Chicago Scholars Charity while Team Giannis was still able to award $100,000 to the After School Matters charity. Giannis led his team in points with a total of 25 and rebounds with a total of 11. Despite falling short to Lebron, Giannis explained how great of an experience the game was.

Team Lebron also boasted the ‘Kobe Bryant All-Star MVP’ winner Kawhi Leonard. Leonard scored a total of 30 points, seven rebounds, and four assists. Leonard revealed that he came into the game with the goal in mind.

Lebron James contributed his own 23 points, five rebounds, and six assists. Lebron emphasized how special it was to include Kobe Bryant during the historic day.

Parker Welch is a Junior at the University of Florida majoring in Sports Media at the College of Journalism & Communications.
@parkerrwelch
Previous Gators Softball Coach Walton Gets 900th Win
Next Manfred stays behind Astros punishment, not punishing players