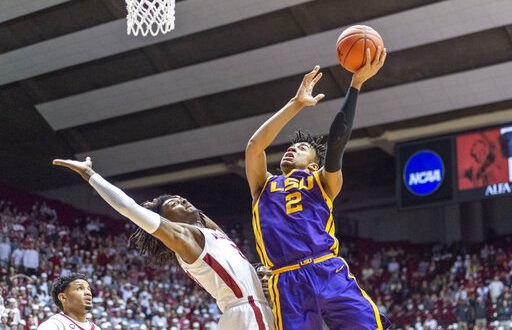 LSU forward Trendon Watford (2) gets off a shot while colliding with Alabama guard John Petty Jr. (23) during the first half of an NCAA college basketball game, Saturday, Feb. 15, 2020, in Tuscaloosa, Ala. (AP Photo/Vasha Hunt)

Tonight it’s a battle of two of the top teams in the SEC.

The tenth ranked Kentucky Wildcats will be on the road in Baton Rouge to take on a luke-warm LSU Tigers squad.

Here is each team’s form coming into the match-up.

Kentucky has been on a tear since losing to Auburn at the beginning of the month.

Winners of each of their last four games, The Wildcats have claimed the top spot in the SEC with only six games left in the regular season.

Each of their last wins have been all against teams outside of the top five in the league.

#BBN appreciation for @IQ_GodSon's big shots and free throws down the stretch. @Wendys Player of the Game. #TGT https://t.co/2fGSvZMkoi pic.twitter.com/NNSPxwCztQ

But, none of those four games bring the same challenge that the LSU Tigers at home can bring.

LSU has almost been on the complete opposite side of the coin as Kentucky. The Tigers have been losers of three of their last four games.

The catch to that however is that each of those three losses were on the road. The Tigers are a different squad at the Pete Maravich Assembly Center.

LSU is undefeated at home in SEC play this season.

Not all hope has been lost for the Tigers, a tough three game stretch starting tonight brings opportunity to regain momentum into both the SEC and NCAA tournaments.

Needless to say a top-10 win is a must for any team’s resume this late in the year and would cause a tie on top of the SEC.