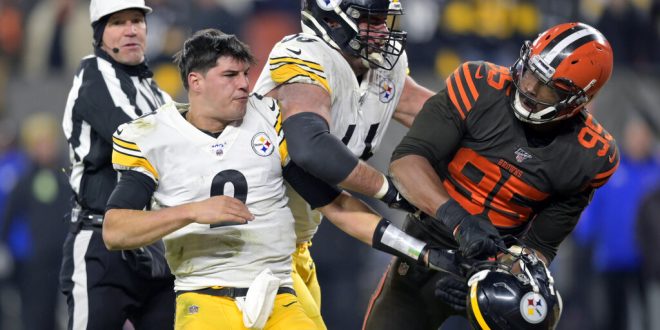 The fallout from the Mason Rudolph and Myles Garrett brawl during the Steelers-Browns game in November has continued into February.

On Saturday morning, Myles Garrett was interviewed by Outside the Lines, and he made some eye-opening accusations against Rudolph.

Myles Garrett sat down with @minakimes to discuss the Week 11 incident that led to his suspension.

He again alleged Mason Rudolph of using a racial slur prior to the brawl. pic.twitter.com/8FUKDbKIg4

“He called me the n-word,” Garrett said. “I don’t say the n-word…it just shouldn’t be said…I don’t use it because I don’t find it appropriate.”

Garrett’s accusations are strong and very aggressive toward Rudolph’s character. Soon after the interview released, Rudolph posted on Twitter his reaction:

Rudolph was not happy to hear it. pic.twitter.com/eF8d3jORjR

Rudolph called it a “bold-faced lie” and denied any accusations that he used a racial slur.

On Monday morning, Tomlin made his feelings known about the whole Rudolph-Garrett ordeal.

During the interview, Tomlin boldly defends his quarterback.

“I support Mason Rudolph, not only because I know him, but because I was on the field following the altercation,” Tomlin said. “If Mason said what Myles claimed, it would have come out during the many interactions I had with those in the Brown’s organization.”

Mike Tomlin reacts to the allegations made against Mason Rudolph. pic.twitter.com/H2lkcu4YQY

He said he took offense to the accusations against Rudolph, stating that the Steelers organization was cooperative during the process.

Initially, rumors of racial slurs didn’t surface. Garrett didn’t accuse Rudolph of such remarks, and many thought that this process was over and done with.

Garrett was suspended indefinitely because of his helmet-swinging actions.

Tomlin said during the interview that the situation was very “he said, he said” afterward. But that everything was laid to rest after the NFL finished its thorough investigation.

He says in the interview that if the NFL didn’t find any hard evidence of racial remarks, then the chances that it happened are small.

Tensions may be high next season when the Browns and Steelers meet up.