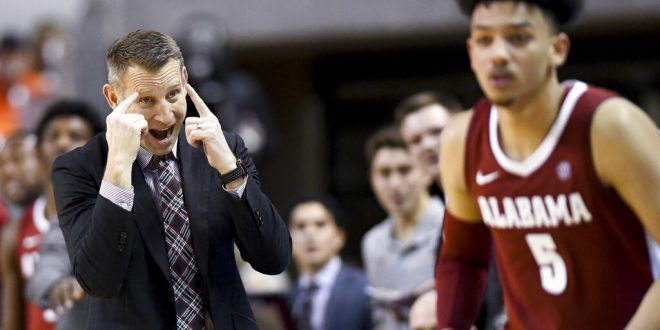 The Alabama Crimson Tide welcome in the Texas A&M Aggies for a Wednesday night SEC matchup.

Coming into this SEC matchup

Alabama sits at 14-11 while the Aggies are 12-12 on the season. Both teams sit at 6-6 in conference play making this game that much more important with the regular season winding down.

Starting with the Crimson Tide, they went through a stretch of tough losses at the end of January and the beginning of February. This includes a 14 point loss to LSU and home losses to Arkansas and Tennessee by a combined five points.

Recently though, Alabama has played much better. With wins at Georgia, against LSU and just a four point loss at Auburn, first year SEC head coach Nate Oats has his team right on the bubble of the NCAA Tournament.

We have another opportunity at home tomorrow night against Texas A&M.

Much of the credit for Alabama’s improved play can go to Kira Lewis Jr. In his last three games he is averaging 27.7 points, 8 assists and 5.3 rebounds. He was named SEC player of the week for his performances.

Another first year SEC coach in Buzz Williams leads the Aggies. Texas A&M has played inconsistently throughout the year as they sit last in the SEC in points per game and 3-point percentage.

Despite this, Williams’ squad has played tough defense throughout the season. They rank second in the conference in points allowed per game giving up just 64 per game.

If the Aggies are going to come away with the upset in tonight’s SEC matchup, they’re going to need to rely on their size. Senior forward Josh Nebo has been one of the only reliable players for Williams this season. He averages 11.4 points with 6.4 rebounds but leads the SEC in field goal percentage at 67.6% and is third in blocks averaging just over two a game.

What they’re playing for

Alabama is right on the bubble of an NCAA Tournament birth. According to Joe Lunardi’s Bracketology, they are part of the First Four Out. This doesn’t mean they have no chance just that the Crimson Tide have some work to do.

Unfortunately for Alabama, they don’t have any remaining games against legitimate tournament opponents before the SEC tournament. Their toughest game comes on the road against Mississippi State. Still for Alabama, they have to not slip up and show that they are a quality basketball team down the stretch.

As for Texas A&M. They won’t be making the NCAA Tournament and maybe they’ll make the NIT. Still, this team has a lot to be excited about. Buzz Williams is one of the more established coaches not only in the conference but nation.

The Aggies are a young team with a bright future based on their coach and future recruiting classes. March is just around the corner but the madness around the SEC has already begun.