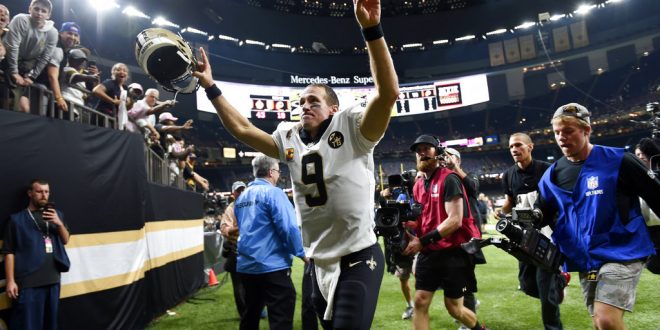 The quarterback who has the most passing touchdowns, passing yards and completions in NFL history will be returning to the New Orleans Saints for another season.

After considering retirement following the 2019-20 NFL season, Drew Brees came announced on Tuesday he will be returning to the Saints for the 2020 season.

The future-Hall of Fame quarterback took to Instagram to announce to Saints fans that he will be returning for his 20th season in the league.

My feelings about the 2020 season! I look forward to the grind and the journey, for the reward at the end will be worth it!!! Love you #WhoDatNation. Let’s make another run at it!

As ESPN’s Adam Schefter explains, this move is not for money, but rather to make another push for the Saints to win their second Super Bowl in franchise history.

In recent years, Drew Brees has been a key figure in putting together great regular seasons for New Orleans. However, postseason failures are too common. In 2017-18, the Minneapolis Miracle saw the Saints lose on the last play of the game. The 2018-19 NFC Championship was the infamous pass interference that led to a Rams win in New Orleans. Most recently, the Saints were knocked out again by the Vikings in the divisional round of the NFC playoffs in overtime, at home.

The frustration for Brees being knocked out on the final play three years in a row made it obvious he would return, according to Schefter.

The Brees-Thomas duo set a record in the 2019 regular season for receptions in a single season with a mind-boggling 149 catches.

Drew Brees has one of the more illustrious careers in the history of the NFL, regardless of position.

Among his wide variety of awards and honors, he is a Super Bowl Champion and Super Bowl MVP.

However, anyone can have a good season or two. Perhaps more eye-catching are his wide variety of NFL records he has broken as a quarterback for the Saints and Chargers.

Drew Brees is the NFL’s all-time leader in pass completions, passing yards and passing touchdowns. Interestingly, New England’s Tom Brady is No. 2 in all three categories.

The records make his personal career shine. But for Brees, bringing the Lombardi Trophy back to the Mercedes-Benz Superdome is the end goal.

Initial reaction to Brees’s announcement is joy. However, the Saints are stacked for quarterbacks that could be leaving with the return of No. 9.

Taysom Hill, the do-it-all guy for the Saints, stated earlier this offseason he wants a starting job at QB. Adam Schefter explains that Taysom Hill will still likely be in New Orleans this upcoming season.

The other quarterback is Teddy Bridgewater, who stepped in during Brees’s 5-week absence to with a 5-0 record. Bridgewater has starting quarterback experience with two teams. Perhaps a third could be a division rival.

The Saints’ window to win another Super Bowl seems to be closing.

Drew Brees has stated in the past he believes he can play until he is 45, but he may never see a better shot than he has the past couple years or this upcoming season.

Originally from Seminole in the Tampa Bay area, Kyle is a contributor for ESPN Gainesville as well as local NPR and PBS affiliate WUFT. Kyle wants to get into sports with a lofty dream of being a sports broadcaster. He was raised playing soccer and baseball while watching hockey and football, so the knowledge about various sports is fairly extensive.
@KyleFanslerUF
Previous Dodgers ready to move on
Next Alabama hosts Texas A&M in SEC matchup