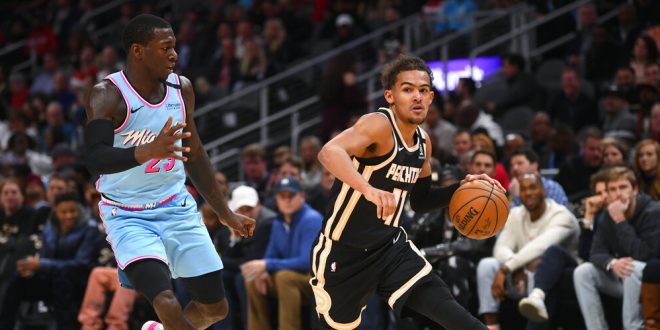 For the Heat, the loss picks up on a disturbing slump. Their fifth loss in the last six games came against an Atlanta team that had only won 15 games on the season prior to the game.

A Race to the Finish Line

The Heat held 11-point leads twice in the game, including late in the third quarter. Furthermore, they led 97-90 entering the fourth quarter. But from there, Trae Young continued to put the team on his back, scoring 20 points in the final period.

Young actually shook off Andre Iguodala and sunk a deep 3-pointer to tie the game with just over 11 minutes remaining.

From there, it was a shootout from both sides. Young would nail multiple threes, one even from the edge of the Hawks logo. His efforts, combined with De’Andre Hunter’s play inside the paint and Cam Reddish’s defense, kept the Hawks afloat.

However, Skills Challenge Champion Bam Adebayo would not be silenced for the Heat. Miami went on a run in the final minutes to take a 124-119 lead, and Adebayo capped it with an impressive and-one on the fast break. He would finish with 28 points and a season-high 19 rebounds, but the Heat would not score in the final 1:51.

Instead, the Hawks would go on a 10-0 run to end the game. A three-pointer from Hunter knotted the game at 124-124, and Reddish came away with a steal and score to give the Hawks the lead and eventual win.

Hunter and guard Kevin Huerter both recorded 17 points on the game, and Reddish put up 16. In the end, though, the night belonged to Young.

Lights out for Trae Young

No matter who the Heat put on Young, he seemed virtually unstoppable throughout the game. Young has now recorded 11 games with at least 40 points, which passes Shaquille O’Neal (10) for the most in NBA History through a player’s first two seasons.

For Trae, Thursday night represented revenge of some sort. The last time the Hawks played the Heat, Young could be seen saying, “It’s over!” when Atlanta jumped to a 6-point lead in the final minute. Then, of course, the Heat tied the game up and eventually won in overtime. Jimmy Butler made sure to let the young Hawks guard hear about it, too.

Trae seemed to have gotten the last laugh, though, and it didn’t take him long to get a jab back on Twitter.

A play in three acts… pic.twitter.com/fB1frOM6cf

Where Does that Leave Both Teams?

The Heat get off to a shaky start from the All-Star Break and continue their sloppy performance on the road. Despite going 22-3 on their home court, this loss drops them to 13-17 on the road. Their main struggle has been defense, and Jimmy Butler wasn’t hesitant in recognizing what their issue is.

They’ll hope to get back on track with two games coming up against the Cleveland Cavaliers.

On the other side, the Atlanta Hawks are simply taking it one game at a time, as they rank as the second-worst team in the Eastern Conference. Thursday night will be a game long remembered, though, for Hawks and Trae Young fans alike.